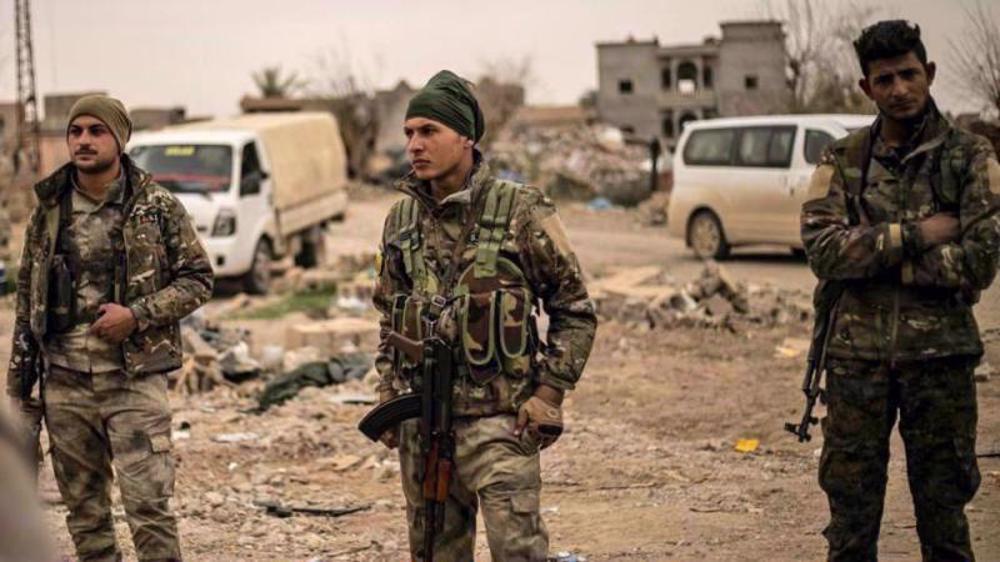 In this file picture, US-sponsored militants affiliated with the Syrian Democratic Forces (SDF) stand in the village of Baghouz in Syria's eastern province of Dayr al-Zawr near the Iraqi border. (By AFP)

At least two militants affiliated with the Syrian Democratic Forces (SDF) have been killed and several others injured as the Turkish military carried out a string of fresh airstrikes against the positions of the militant group in Syria’s northern provinces of Hasakah and Raqqah.

The so-called Syrian Observatory for Human rights reported that a Turkish combat drone struck a vehicle on Sunday as it was traveling along a road on the outskirts of Qamishli city in Hasakah province.

A high-profile militant affiliated with the US-sponsored and Kurdish-led SDF and his driver were killed in the attack, while three others sustained injuries.

Ambulances rushed to the scene of the aerial assault shortly afterward and transported the injured people to hospitals in the city.

This comes as the Ankara government is making efforts to flush out members of the US-backed Kurdish People’s Protection Units (YPG) militant group from areas close to its border.

An SDF militant was also killed and two others were seriously wounded when a Turkish drone targeted an area east of Ayn Issa town in the Tal Abyad district of Syria’s northern province of Raqqah.

Ankara-backed militants were deployed to northeastern Syria in October 2019 after Turkish military forces launched a long-threatened cross-border invasion in a declared attempt to push members of the YPG, which forms the backbone of the SDF, away from border areas.

Ankara views the YPG as a terrorist organization tied to the homegrown Kurdistan Workers’ Party (PKK), which has been seeking an autonomous Kurdish region in Turkey since 1984.

Turkish President Recep Tayyip Erdogan has already stated that a new Turkish operation against the YPG militants will remain on the agenda until security concerns are addressed.

Both Iran and Russia, which have been aiding Damascus in its anti-terror campaign, have warned Turkey against launching such an offensive.

US opens embassy in Solomon Islands21min

'US to leave Syria soon, militants should take lessons from Afghanistan'