US to toughen penalties for joining Arab League's Israel boycott 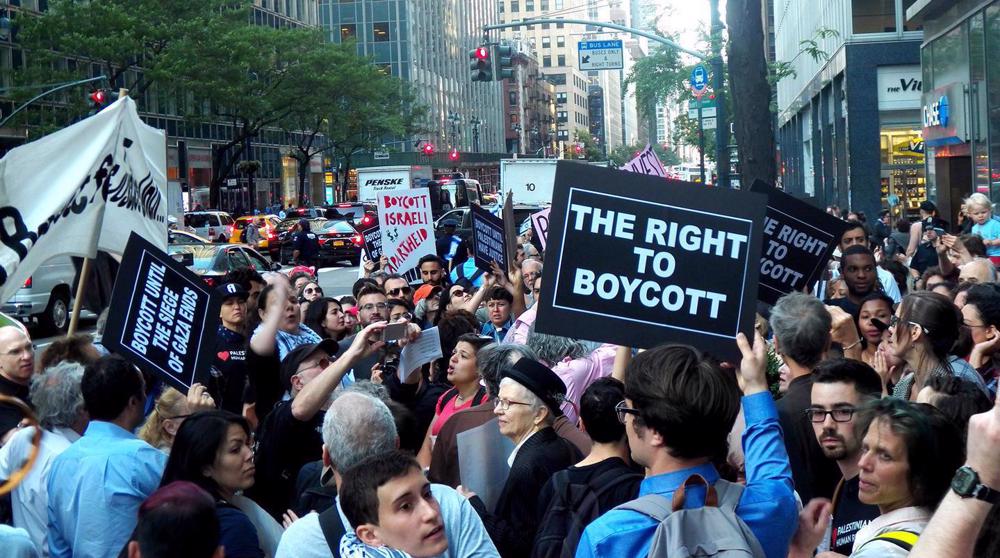 Demonstrators protest outside the office of New York State against a law that bars the state from investing in companies that support boycotts of Israel, New York City, the United States. (File photo by Getty Images)

The US Department of Commerce has announced plans to ramp up enforcement of anti-boycott laws, in an attempt to exert pressure on the Arab League to normalize relations with the Israeli regime.

The new policy, announced by the department on Thursday, would increase fines against US companies boycotting Israel, and also broaden its focus on foreign subsidiaries of American companies.

The policy builds on a US law passed in 1979, which states American companies and individuals will face criminal and civil penalties for participating in the Arab League's longstanding position to boycott the Tel Aviv regime.

Matthew Axelrod, who oversees anti-boycott enforcement at the Department of Commerce, uncovered the new policy in a memo to department staff and at an event at the American Jewish Committee's Washington office.

“I want to ensure that we in the Commerce Department are doing what we can to have the strongest possible anti-boycott enforcement program,” he said.

Axelrod went on say that the new policy could help create pressure on countries that have yet to normalize relations with Israel, including Syria and Iraq, which he claimed were “moving in the wrong direction.”

The policy changes come two years after the United Arab Emirates, Bahrain, Sudan and Morocco became the first Arab countries in decades to break long-standing consensus in the Arab world and normalize relations with Israel in a deal brokered by former US president Donald Trump.

Arab countries had long held the position that normalization with the Tel Aviv regime would come only after its withdrawal from illegally occupied Palestinian territories.

Lawmakers in the US are also working to push forward laws that would criminalize the Palestinian-led Boycott, Divestment and Sanctions (BDS) movement.

More than 30 US states already have passed their own versions of legislation that effectively forces individuals and companies contracted with the state to sign a pledge not to boycott Israel.

The BDS movement, which is modeled after the anti-apartheid movement in South Africa, was initiated in 2005 by over 170 Palestinian organizations that were pushing for “various forms of boycott against Israel until it meets its obligations under international law.”

Thousands of volunteers worldwide have since then joined the BDS movement, which calls for people and groups across the world to cut economic, cultural, and academic ties to Tel Aviv, to help promote the Palestinian cause.

US judge speaks up against pro-Israel law in Georgia