Peruvian authorities have shut down the country's major tourist attractions, including the Incan citadel of Machu Picchu and the Inca trail, as anti-government protests rage on across the country.

"The closure of the Inca trails network and the Machu Picchu citadel has been ordered due to the social situation and to preserve the safety of visitors," the Ministry of Culture said in a statement on Saturday.

Meanwhile, Alfonso Barrenechea, an official at the prosecutor's office, told local radio station RPP that police had arrested 205 people at the Universidad Nacional Mayor de San Marcos for illegally trespassing on the university's premises and for allegedly stealing electronic goods.

Security forces used an armored vehicle to breach the gate of the university in the capital city of Lima's downtown. This came after a group of masked protesters stormed the campus late Friday and removed security personnel from the campus after taking vests and other equipment from them, the university said in a statement.

Following Machu Picchu's closure, at least 400 people, including 300 foreigners, have been stranded at the foot of the site, in the town of Aguas Calientes, pleading to be evacuated.

Prior to the closing of Machu Picchu, rail services to the site had been suspended due to damage to the track by demonstrators. The only way to get up to the popular tourist site is by train.

"Some tourists have chosen to walk to Piscacucho, but that takes six hours or more and very few people can do it," he said. Piscacucho is the closest village to Machu Picchu that is connected to the roads.

Airports in Arequipa, Cusco and the southern city of Juliaca were also attacked by demonstrators, delivering a fresh blow to Peru's tourism industry.

The protests began last month after former president, Pedro Castillo, was ousted and arrested after he tried to dissolve the parliament and rule by decree. He has been charged with rebellion among other offenses.

Since then, at least 46 people have died in violent clashes between the security forces and Castillo's supporters, who have been setting up burning roadblocks, attempting to storm airports, and staging mass rallies across the country.

Among the 46 dead since the protests began, 45 were protesters and one was a police officer. Nine others have also died in traffic accidents related to the barricades that have been set up amid the protests.

The protesters have been pressing on with their demands for resignation of President Dina Boluarte, closure of Congress, and new elections. 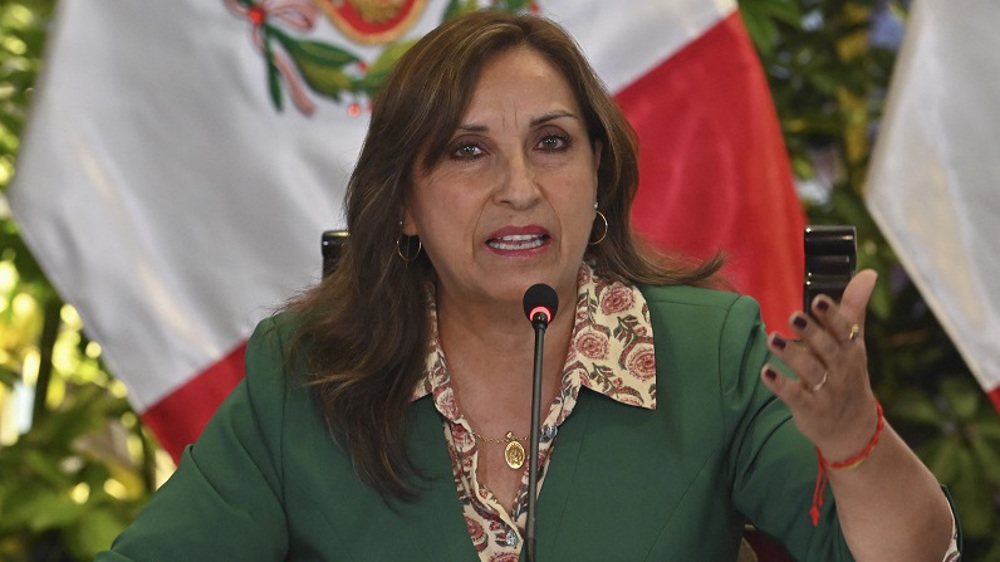 Peru's president rejects calls to step down despite raging protests
Peruvian president Dina Boluarte has said that she will not step down amid deadly protests.

Boluarte has only agreed with moving the elections forwards, claiming that the rest of the protesters' demands served as a pretext for continued chaos across the country.

The unrest, which until this week had been concentrated in Peru's south, has prompted the government to extend a state of emergency to six regions, curtailing some civil rights.

The European Union on Saturday condemned the chaos and the "very large number of casualties," calling for a peaceful political solution in Peru.

2 US officers involved in killing of Black man suspended 13min

Is the US planning war with China?39min 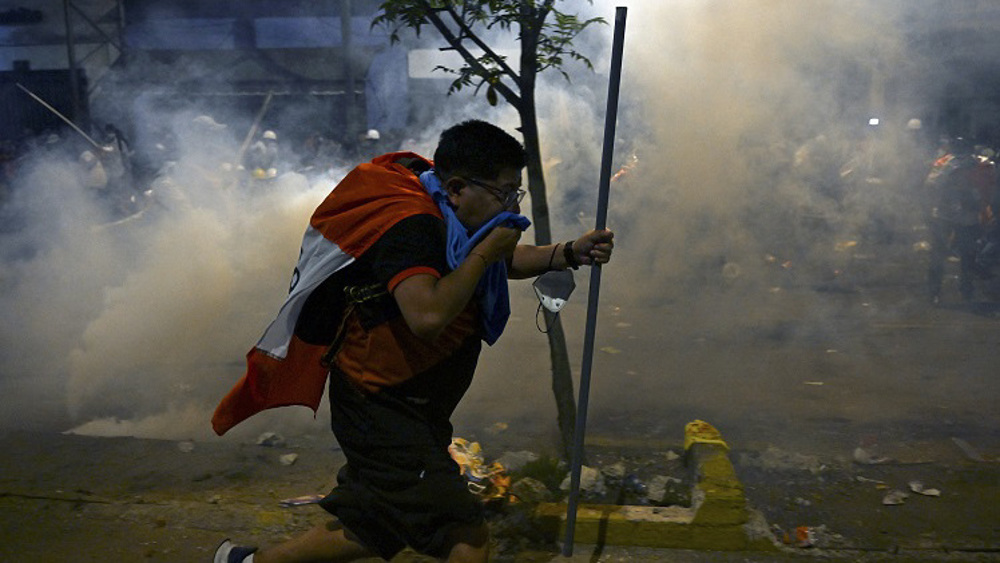 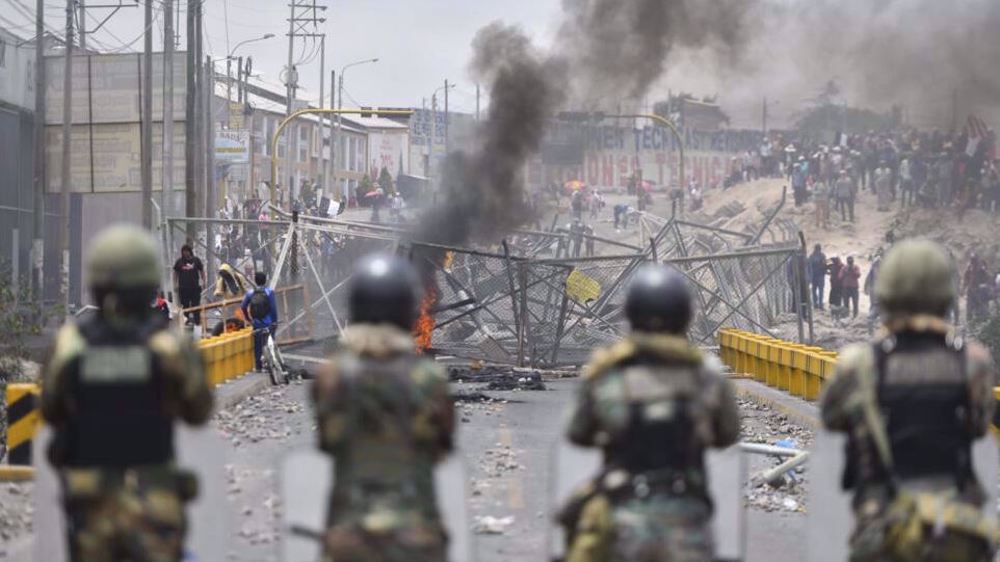 Peru protests rage on despite president's plea for calm 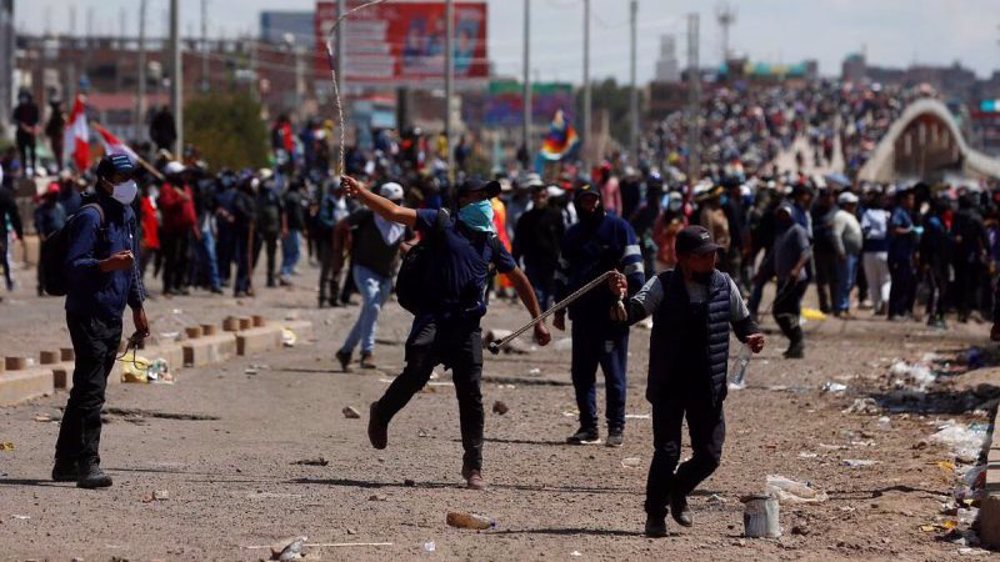 Thousands march on Peru’s capital to call for president's ouster