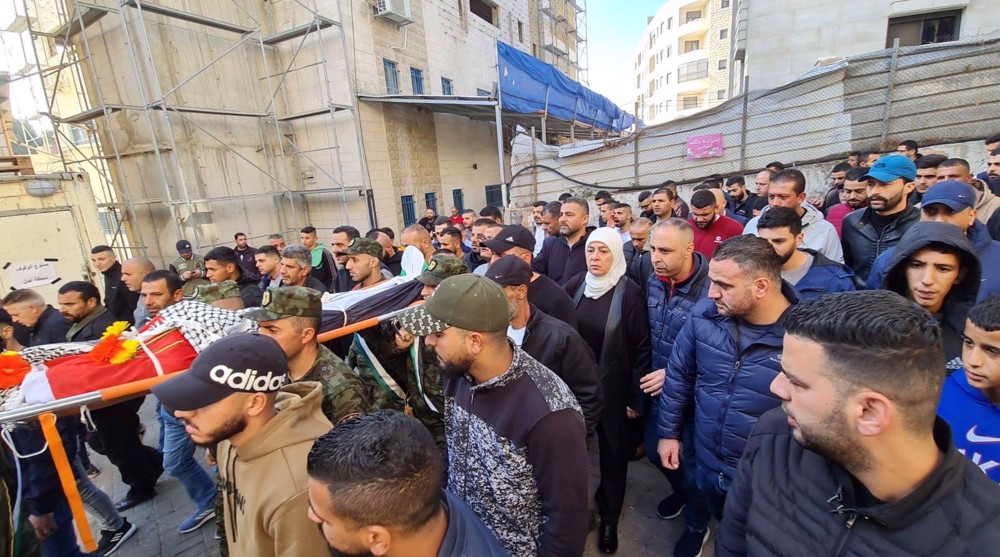 Palestinians take part in the funeral procession of Dia Mohammad Rimawi in Beit Rima, northwest of Ramallah, on December 9, 2022. (Photo by WAFA)

Hundreds of mourners have participated in the funeral procession of a Palestinian teenager fatally shot by the Israeli regime’s forces in the town of Aboud, northwest of the occupied West Bank city of Ramallah.

Palestinian media reports said the mourners marched through the streets of the nearby village of Beit Rima, northwest of Ramallah, on Friday as they carried the body of 16-year-old Dia Mohammad Rimawi, who had been killed by Israeli gunfire on Thursday evening.

“The body was carried on the shoulders of the martyr's family and friends,” the official Palestinian news agency WAFA reported. “The air was filled with flags, cries of resistance against the occupation, and chants in honor of Palestine's liberation.”

The 11th-grade student is the 52nd Palestinian child killed by the Israeli occupation forces since the beginning of the year.

Media coverage: "Mother of Palestinian teen Diyaa Al-Rimawi, 16, who was shot and killed yesterday by Israeli occupation forces near Ramallah, carries her son's body during his funeral." pic.twitter.com/KuQ5KGoAwj

The town of Aboud is where three Palestinians were injured on Thursday morning, with one of them being arrested by the regime’s forces despite his critical condition as he was transferred to a hospital.

The three victims were identified by the Palestinian Ministry of Health as Siqdi Zakarneh, 29, Atta Shalabi, 46, and Tareq al-Damaj, 29.

The latest figures brought up the number of Palestinians killed by Israeli forces since the beginning of the year to 216, including 164 in the West Bank and 54 in the besieged Gaza Strip.

Israeli forces have recently been conducting overnight raids and killings in the northern part of the West Bank, mainly in the cities of Jenin and Nablus, where new groups of Palestinian resistance fighters have been formed.

According to the United Nations, the number of Palestinians killed by Israel in the West Bank this year is the highest in 16 years.

Incidents of sabotage and violence by settlers against Palestinians and their property have also become a daily occurrence throughout the occupied territories, not least the West Bank. However, Israeli authorities rarely prosecute settlers and the vast majority of the files are closed due to deliberate police failure to investigate them properly.

Muslims rise up in protest across world to condemn Qur'an desecration10min