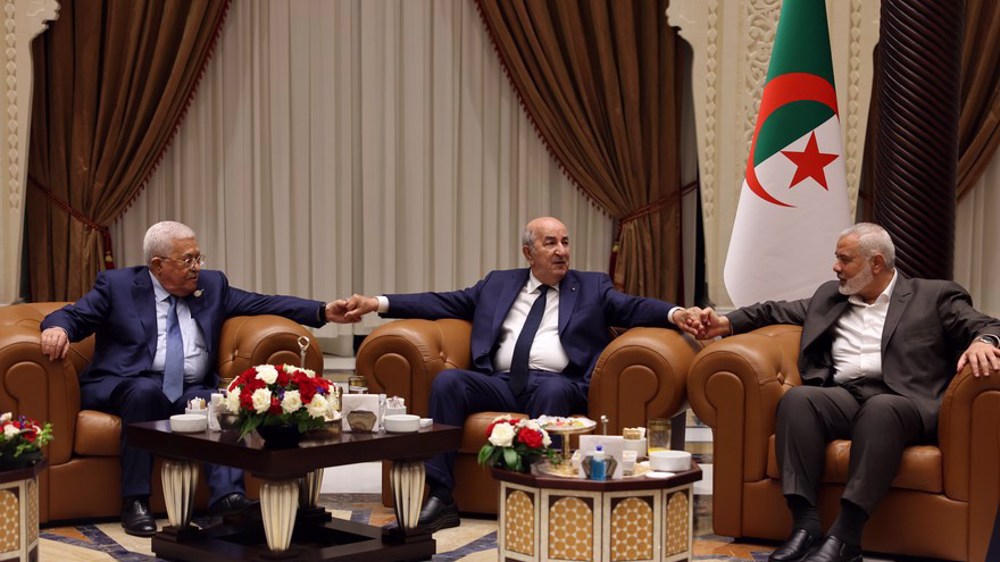 The leaders of two major Palestinian groups, the Hamas resistance movement and Fatah political party, have begun a new round of talks in Algeria in a bid to discuss a proposal for reconciliation and national unity.

Palestine's ambassador to Algiers Fayez Abu Aita said in an interview with the Voice of Palestine radio station on Saturday that the two-day dialog meetings will be attended by representatives of twelve Palestinian groups, including the Gaza-based Palestinian resistance movement Hamas and Fatah, which rules the occupied West Bank.

He went on to say that the proposal to discuss ways to end the Palestinian division and achieve unity was drawn up after “months of effort by Algeria to reach a common vision for boosting the Palestinian national action.”

The latest intra-Palestinian discussions are occurring ahead of the annual Arab League summit being held early next month which "Algeria wants to be a purely Palestinian summit," Abu Aita said.

The Palestinian leadership has been divided between Fatah and Hamas since 2006, when the latter scored a landslide victory in parliamentary elections in the Gaza Strip. Hamas has ever since been running the coastal enclave, while Fatah has been based in the autonomous parts the Israeli-occupied West Bank.

Previous reconciliation attempts by the two sides to form a power-sharing unity government in Gaza and the West Bank have failed.

The initiative is the latest attempt to solve a years-long rift that has caused division among Palestinian factions.

Earlier this year, the Algerians hosted a similar meeting of Palestinian factions to try to bring to an end the rivalry between Fatah and Hamas, but it ended without agreement.

Algerian President Abdelmadjid Tebboune launched the initiative to unite the Palestinians in January. Algerian officials held separate dialogues with officials from Fatah and Hamas to discuss the outlines of the proposal in advance of the talks.

However, doubts have overshadowed the gathering as few expect a significant breakthrough.

Past efforts brokered by other Arab countries, including Egypt, have failed to end the rift between the two Palestinian movements.