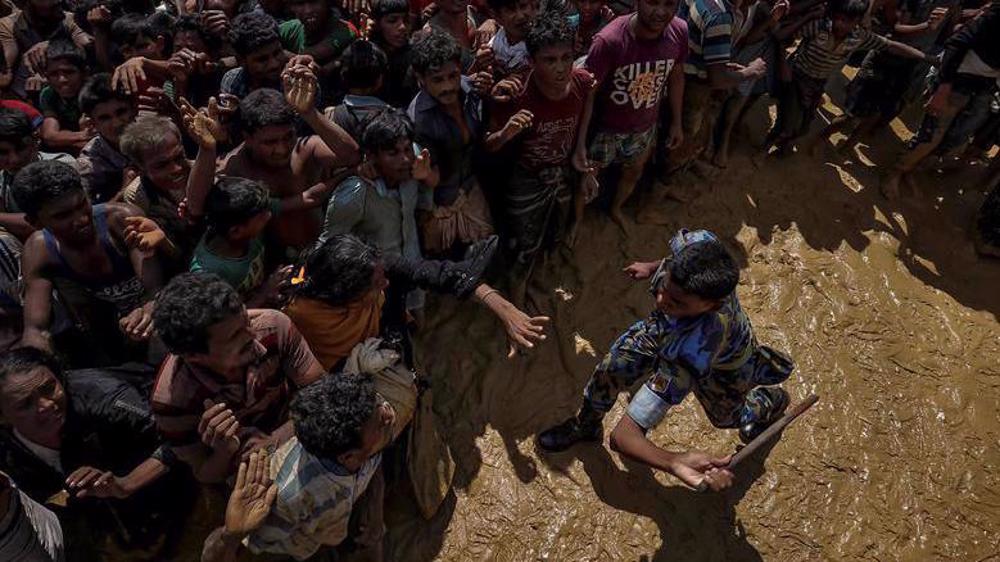 A security officer attempts to control Rohingya refugees waiting to receive aid in Cox's Bazar, Bangladesh, on September 21, 2017. (By Reuters)

Newly declassified data demonstrate how the Israeli regime backed the Myanmar army through various repressive means, enabling it to commit atrocities against dissidents as well as minority groups such as Rohingya Muslims.

Some 25,000 pages of Israeli foreign ministry documents have been recently declassified which show deep military ties between Israel and Burma (which later changed its name to Myanmar) from the 1950s until the beginning of the 1980s.

According to a Thursday report by Haaretz, the documents show that all of Israel’s governments viewed, in the vicious civil war that raged there, the military junta and the army’s corruption and violence, both a diplomatic opportunity for Israel and a business opportunity for the Israel Defense Forces and the military industries.

Citing the documents, the report notes that the occupying regime has played a key role in the establishment of the Asian country’s army, which has ruled first Burma, then Myanmar, with lethal cruelty for most of the country’s existence.

“Israel assisted the army in reorganizing as a modern force, armed and trained it, and contributed dramatically to building its might and entrenching its hold as the most powerful element in the country. That power initially enabled the army to manage the country from behind the scenes, and afterward to remove the civilian leadership and forge a variety of different military regimes,” reads the report.

The documents reveal that one of the main aims of Israel was to win Burmese support in international forums in exchange for its arms support.

“It was of no interest to successive Israeli regimes that the military aid was not intended for purposes of defense against external enemies, but was used to make war against the country’s inhabitants,” notes the report, adding that no Israeli representative has ever voice objection to arms sales to Myanmar in that period.

According to the report, Israel perceived the deadly civil war in Burma in the 1950s as a “golden opportunity” for increasing its arms sales to Burma.

Meanwhile, Burma was also inspired by Israel’s occupation of Palestinian lands and building illegal settlements as they tried to settle military personnel in regions inhabited by rebellious ethnic minorities, in the style of the IDF’s Nahal Brigade outposts.

The documents show that despite being aware of widespread internal oppression in the Asian country, including an attempt to undertake ethnic cleansing of the Muslim minority, Israel continued to offer Burma security services.

“We are interested in establishing a connection between our Mossad and the Burmese Mossad,” Kalman Anner, then the director of the Asia Desk wrote in January 1982 after the Israeli regime saw the ethnic cleansing of the Rohingya people as an opportunity.

“Subsequently, the Israeli embassy in Burma received an envelope from the Mossad containing intelligence material to pass on to its Burmese counterpart regarding the ‘Muslim underground in Southeast Asia [which operates under the] inspiration of Iran and Libya’,” reads the report.

Although more recent documents still remain classified, there have been no signs of change in Israel’s support for the Myanmar army.

Back in November 2019, Israel’s ambassador to Myanmar Ronen Gilor wished “good luck” for the Myanmar army in regard to deliberations taking place against them at the International Court of Justice in The Hague on charges of perpetrating genocide against the Rohingya people.

On February 1, 2021, the Myanmar military seized control of the country in a coup. According to UN estimates, some 14,000 people have been arrested and at least 2,000 people killed since then. The Israeli regime has refused to condemn the coup and atrocities.

Rohingya teenager killed in Bangladesh by mortar fired from Myanmar