The Palestinian Hamas resistance movement has censured British Prime Minister Liz Truss for calling herself a “huge Zionist” who wants to strengthen London’s relationship with Tel Aviv, saying the comments are in line with the UK’s 1917 Balfour Declaration, which set the stage for the creation of the Israeli regime and occupation of Palestine.

“Her statements about supporting Zionism mean she is standing at the Zionist regime’s side and supporting aggression against the Palestinian nation,” Hamas spokesman Sami Abu Zuhri said in a statement.

He added that such remarks are in line with British crimes, which began more than 100 years ago with the Balfour Declaration, against the Palestinian cause which is fighting off the Israeli occupation.

The Hamas official said the UK premier was one of those who cover up the killing of innocent children, adding, “This is shameful for the humanity.”

The Balfour Declaration came in the form of a letter from Britain’s then-foreign secretary, Arthur Balfour, addressed to Lionel Walter Rothschild, a figurehead of the British Jewish community. It was published on November 2, 1917.

The declaration was made during World War I (1914-1918) and was included in the terms of the British Mandate for Palestine after the dissolution of the Ottoman Empire.

It is widely seen as the precursor to the 1948 Palestinian Nakba, when Zionist armed paramilitary groups, who were trained and created to fight side by side with the British in World War II, forcibly expelled more than 750,000 Palestinians from their homeland. 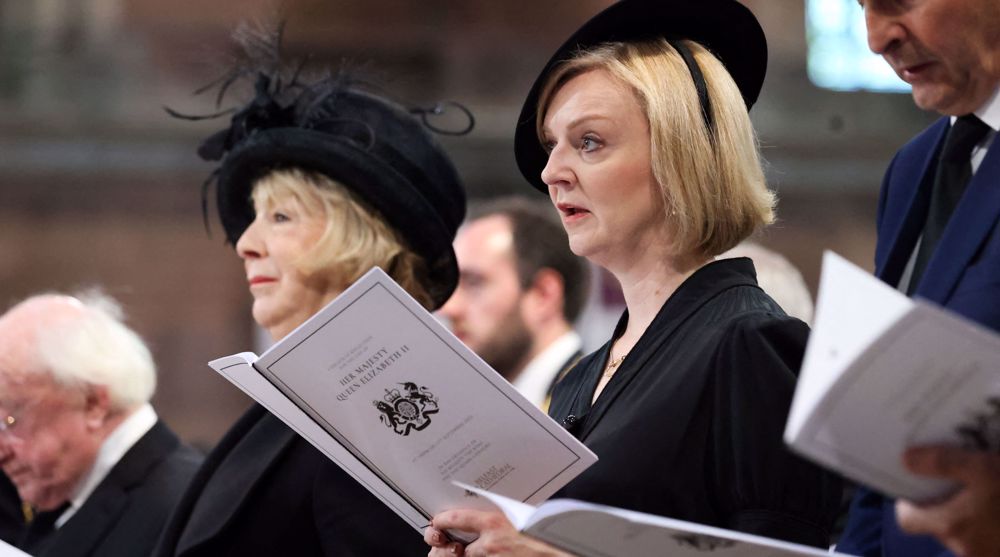 British PM Liz Truss: 'I am a huge Zionist, I am a huge supporter of Israel'
Britain

Speaking at a Conservative Friends of Israel (CFI) event during the Conservative Party conference in Birmingham, Truss expressed her unwavering support for Israel.

“I am so pleased to be here for the first time at the CFI event as your prime minister,” she said on Sunday.

“As you know I am a huge Zionist, I am a huge supporter of Israel, and I know that we can take the UK-Israel relationship from strength to strength,” Truss commented.

Last month, Truss told Israeli prime minister Yair Lapid that she was considering transferring the UK embassy in Tel Aviv to the occupied holy city of al-Quds. If it happens, the contentious policy shift would be similar to that of the US under ex-President Donald Trump in May 2018.

Angered by the UK premier’s announcement, the Palestinians described the statements as “a new Balfour Declaration” and said it proves Britain’s bias in favor of the Israeli regime.

“The announcement by the British Prime Minister Liz Truss about her intention to move her country’s embassy to al-Quds is a flagrant bias toward the occupying regime,” Hamas spokesperson Abdel Latif Qanou said at the time.

He warned that the move would not give Israel any legitimacy “over one inch of our land.”

Hazem Qassem, another Hamas spokesman, warned that moving the British embassy would be considered as a new crime by Britain against Palestinian people.

“We are not surprised by what Britain is doing in light of the ongoing Arab and Islamic silence,” Shalah said. “We blame the Arab and Islamic countries that are supposed to support al-Quds.”

He denounced the move as a “hideous colonial aggression” against Palestinians, adding, “Britain is directly responsible for the tragedy of Palestinian people.”

Israel lays claim to the entire al-Quds, but the international community views the city’s eastern sector as occupied territory and Palestinians consider it the capital of their future state.

Balfour Declaration turns 104., so does the Palestinians suffering