US, European allies rally behind Finland, Sweden in their bid to join NATO

The US and some European governments say they will support Finland and Sweden joining the NATO military alliance despite Russia's warning of dire consequences.

"We would support a NATO application by Finland and/or Sweden should they apply,” White House press secretary Jen Psaki told reporters Thursday. “We would respect any decision they make.”

The move also got the backing of the US Senate, with a top lawmaker saying the chamber will work to ensure “swift consideration” for Finland and Sweden if they apply to be members of NATO.

Speaking at a hearing on US efforts to back Ukraine in its war with Russia, Senator Bob Menendez, who heads the senate foreign relations committee, said the move would be considered swiftly.

He was echoed by top Republican Senator Jim Risch who said Finland's announcement to join NATO was "a tremendous step forward in the future of transatlantic security."

#Finland’s announcement today marks a tremendous step forward in the future of transatlantic security. The decision to move toward #NATO membership is a serious one, and I extend my commitment to support Finland through this process

NATO General Secretary Jens Stoltenberg said Finland's entry into the bloc would be "smooth and swift" once the country applies.

"Should Finland decide to apply, they would be warmly welcomed into NATO, and the accession process would be smooth and swift," Stoltenberg said Thursday.

Russia vows 'retaliatory steps of military-technical nature' if Finland joins NATO
Russia says a Finnish entry into NATO would "definitely" pose a threat to Russia, that would force the Kremlin to respond.

French officials have said Finland’s entry into NATO should be done “without delay”.

German Chancellor Olaf Scholz on Thursday also promised "full support" for Finland's bid to join NATO, after the Nordic country's president and the prime minister said they were in favor of joining the military alliance without delay.

"I welcome Finland's decision to speak out in favor of the country's immediate accession to NATO. In a phone call with President (Sauli) Niinisto, I assured Finland of the German government's full support," Scholz wrote on Twitter.

Finnish politicians, however, expressed fears that Russia would react by cutting its gas supplies to Finland.

On May 5, the Finnish government said it was prepared for the possibility of its eastern neighbor cutting off gas delivery in response to Finland's refusal to abide by Russian demands for gas payments to be made in roubles.

“Finland’s entry into NATO will become a threat to Russia," he said. "The next expansion of NATO does not make our continent more stable and secure." 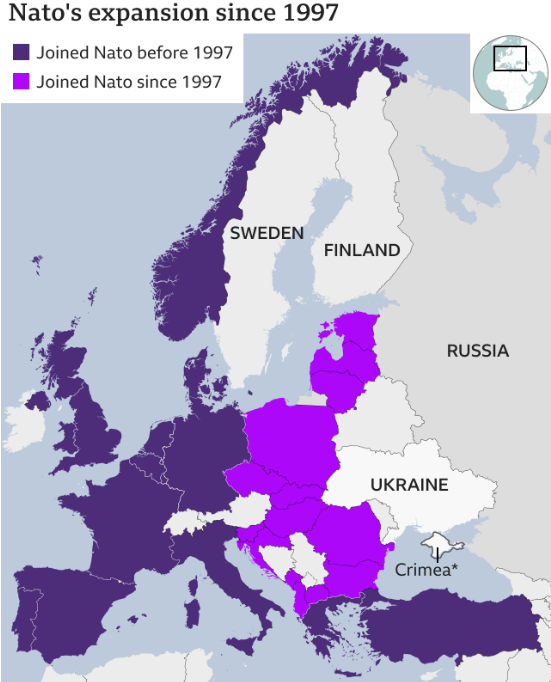 Russia's foreign ministry said it will be forced to take "retaliatory steps", adding Finland's entry into NATO would "seriously damage" bilateral relations, as well as security and stability in northern Europe.

"Russia will be forced to take retaliatory steps, both of a military-technical and other nature, in order to neutralize the threats to its national security that arise from this."

Last month, Dmitry Medvedev, the former Russian president and the current head of the current deputy chairman of the powerful Security Council, warned that Moscow would deploy nuclear weapons close to the Baltic States if Finland and Sweden joined NATO.

On Thursday, he again warned the West that the increasing military support to Ukraine by the US and its allies risked triggering a conflict between Russia and the NATO military alliance.

"NATO countries pumping weapons into Ukraine, training troops to use Western equipment, sending in mercenaries and the exercises of Alliance countries near our borders increase the likelihood of a direct and open conflict between NATO and Russia," Medvedev said in a Telegram post.

"Such a conflict always has the risk of turning into a full-fledged nuclear war," Medvedev said. "This will be a disastrous scenario for everyone."

Iran security chief: World must unite against US unilateralism4hr

Sweden, Finland in talks to join NATO despite Russia’s warnings

Sweden, Finland to be welcomed to NATO with open arms: Stoltenberg