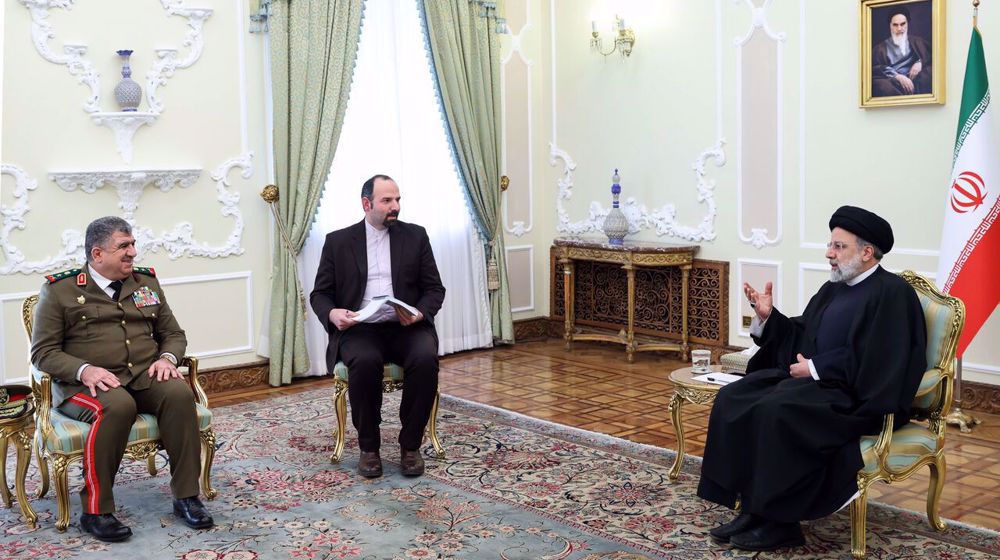 Iranian President Ebrahim Raeisi (R) is seen in a meeting with Syrian Defense Minister Ali Mahmoud Abbas in the capital, Tehran, on January 24, 2023. (Photo by president.ir)

Iranian President Ebrahim Raeisi says relations between Iran and Syria are predicated on the two countries’ spirit of resistance, stressing that Tehran will stand by Damascus in reconstructing the war-ravaged Arab county as it did during its fight against terrorism.

Raeisi said in a meeting with visiting Syrian Defense Minister Ali Mahmoud Abbas in Tehran on Tuesday that Iran-Syria relationship is “strategic” as their ties are based upon “shared beliefs,” and the “spirit of resistance” shown by their people.

The Iranian president also commended the Syrian armed forces’ efforts to protect their country’s nation and government against seditions as a “promising prospect for the future of Syrians.”

Abbas, for his part, said his country emerged victorious in the war on terrorism thanks to “support from its brothers and true friends,” adding that Syria will continue to act as a “ring in the chain of resistance” stronger than in the past.

“The enemies have always been watching for an opportunity to damage the deep and brotherly relations between Syria and Iran, but the ties between the two countries are too deep-rooted and strong for anyone to harm them, and these relations will be more extensive and deeper ever than before,” Abbas underlined.

Iran’s advisory assistance helped Syria defeat the Daesh terrorist group and rid most of its soil of Takfiri terrorism, with late anti-terror commander Lieutenant General Qassem Soleimani playing a key role in the defeat of the Takfiri outfit.