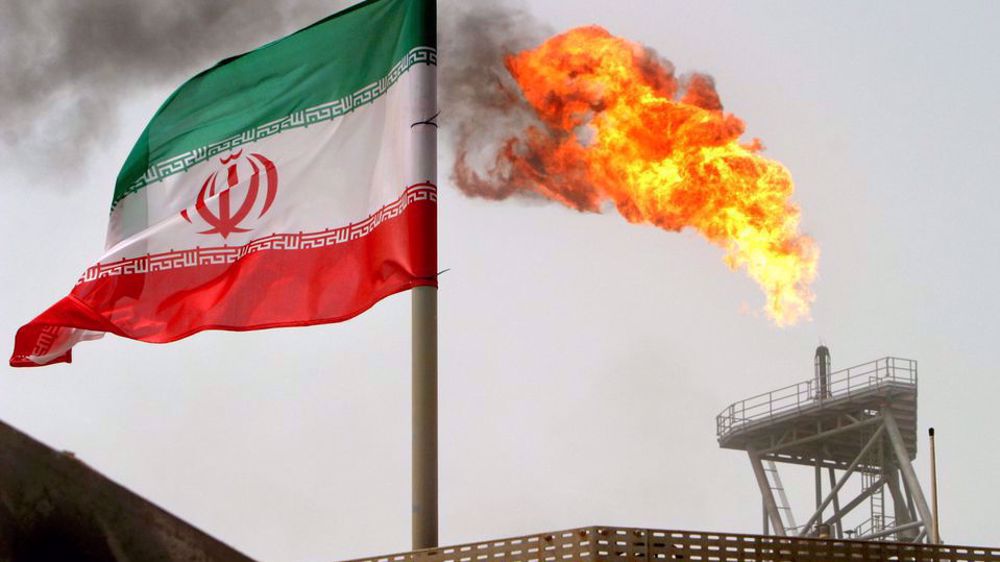 A gas flare on an oil production platform is seen alongside an Iranian flag in the Persian Gulf on July 25, 2005. (Photo by Reuters)

Iran’s oil exports in late 2022 reached records not seen since the country came under US sanctions nearly five years ago, shows a report citing data from international tanker-tracking services.

The Sunday report by the Reuters news agency said Iranian crude shipments continued to rise in early 2023 with higher shipments to China and Venezuela.

Iran has not released official figures about its oil exports over the past years amid efforts to evade Washington’s illegal sanctions.

However, figures by companies that track oil flows around the world have pointed to a steady uptick in Iranian oil sales since mid-2021, especially to private buyers in China.

The Reuters report cited figures from energy consultant SVB International showing that Iran's crude exports had risen by 42,000 barrels per day (bpd) in December last year compared to November to reach an average of 1.137 million bpd, the highest recorded by the company for Iranian overseas shipments over the whole of 2022.

Data by Kpler, another major international tanker-tracking service, showed that Iranian crude exports had peaked at 1.23 million bpd in November, the highest since August 2022, before dropping to just below 1 million bpd in December.

The report also released estimates by Vortexa, which also tracks oil supply, about China’s imports of oil from Iran in late 2022, showing that shipments had increased by 130% year on year to 1.2 million bpd in December 2022.

The figures are a fresh sign that US sanctions on Iran have failed to cut to the country’s oil revenues to zero, an objective frequently stated by former and current US officials.

They also vindicate efforts by Iran in recent years to rely more on diplomatic and economic resources to circumvent US sanctions rather than to submit to Washington’s pressure to scale back its nuclear, defense and foreign policy programs in return for an easing of the sanctions.