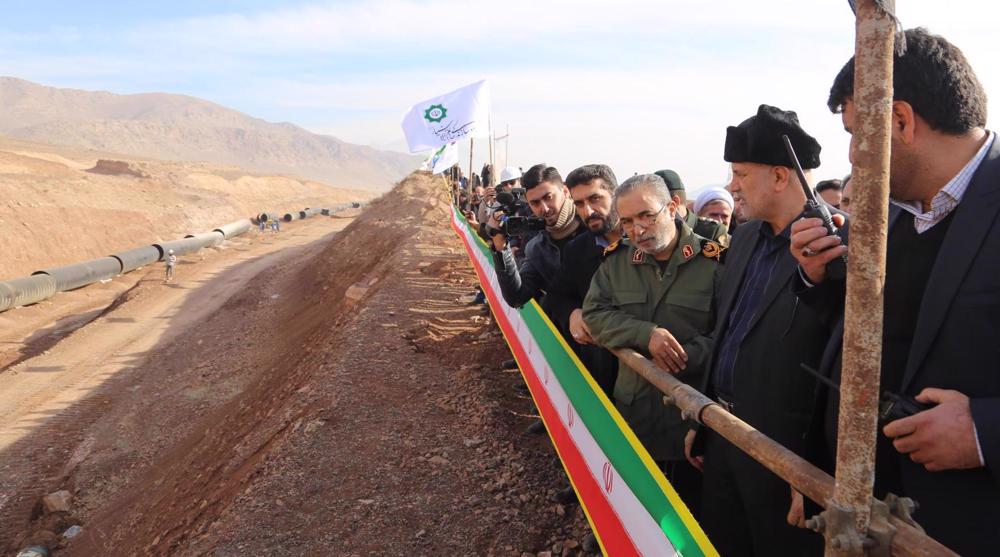 Photo shows local officials in Iran’s northwestern province of East Azerbaijan during the launch of a project to transfer water from Aras river in the village of Zal, located 20 kilometers from Iran’s border with Azerbaijani exclave of Nakhchivan, on January 4, 2023.

Iran has launched a major project to transfer water from Aras, a key river that rises in eastern Turkey and separates Iran from Armenia and Azerbaijan, to urban and industrial regions in northwest of the country.

A Wednesday report by the Iranian Energy Ministry said that the water transfer project from Aras had started earlier in the day in a ceremony attended by the governor of the province of East Azerbaijan and top officials from Iran’s Water Resources Management Company (WRM).

The project started with pipe-laying in the village of Zal, located 20 kilometers from Iran’s border with Azerbaijani exclave of Nakhchivan, according to a report by East Azerbaijan’s provincial government office.

The report said the project is mainly aimed at providing water to a population of 3.5 million people living in Tabriz, Iran’s sixth largest city, and towns and villages around it by 2026, adding that it will also supply water to Aras Free Zone and other industrial regions in East Azerbaijan.

The project has been awarded to the construction headquarters of the Islamic Revolution Guards Corps (IRGC).

Head of WRM’s local branch in East Azerbaijan said the water transfer project from Aras will need some 460 million euros of funding to finish, adding that it will include 110 kilometers of pipelines, three pumping stations, one treatment facility and 11 water storage facilities.

With a total length of 1,072 kilometers and a watershed area of 102,000 square kilometers, the Aras river is of immense strategic significance in the Caucasus region.

Iran has introduced major water supply projects in East Azerbaijan in recent years in a bid to ease a water crisis in neighboring West Azerbaijan province which has led to the gradual drying-up of the Lake Urmia.