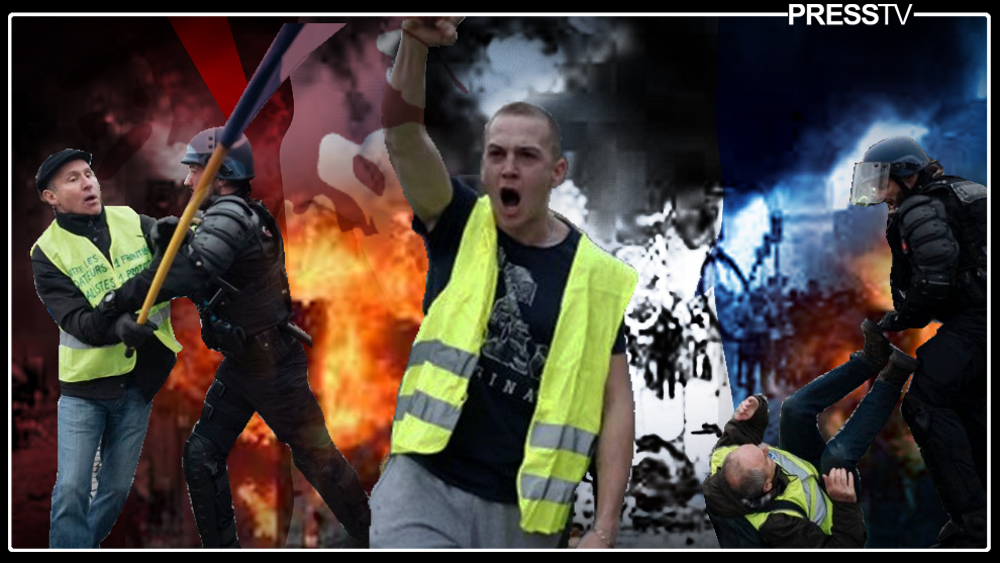 On December 1, 2018, the Yellow Vests announced themselves in France and the world, registering their name in history books with their revolutionary graffiti tagging of the Arc de Triomphe, one of the country's most iconic monuments.

“The Yellow Vests will win” was a slogan that reverberated across the world, as the movement became the biggest, most organic, most devoted and truly revolutionary threat any Western country had faced for over half a century.

It was their third week of protest, and there was no going back now.

The world never expected a genuine resistance movement to sprout in France, a Western imperialist hub. The French were - many insisted - too self-righteous, too spoiled, too indoctrinated, and yet for the next six months every Saturday turned into a war zone across the country.

France was wholly gripped by the revolutionary frenzy at the time, and it was because the French way of life isn’t as extravagant as people may think.

The Yellow Vests didn’t bravely endure all this - at least 11,000 arrests, 1,000 political prisoners, 5,000 protesters seriously hurt, 1,000 critically injured, scores maimed for life and 11 deaths - because they have a luxurious lifestyle.

It is hard to say what was worse - the repression by the French regime, or the way Western media and NGOs slandered and ignored the weekly bloodletting, tear gas shelling and mass arrests.

The Yellow Vests are an immediate, permanent rejoinder to Westerners who claim that their governments are more protective of democracy and less brutal than those in non-Western countries. That’s one of the three great legacies of the Yellow Vests.

The key to understanding the Yellow Vests is this, and it’s implicitly understood by the average European, totally not understood in places like the United States, and has been intellectually mastered by the vanguard Yellow Vests.

Ever since the pan-European project was activated in 2009, it has failed to do anything. Prosperity, stability and democracy - none of these have been implemented. France is not really France anymore - not unless Brussels says so - and it’s becoming less like France with each passing day under a political system that is still new.

So the Yellow Vests were truly 10 years in the making. They even arrived after a decade full of major social movements, because the first war of the European Union wasn’t a proxy war against Russia but the social war it waged against its own citizens.

The problem was not just the Great Recession of 2008 but the fact that the European Union/Eurozone was the only macroeconomic bloc that implemented absolutely no major recovery plan.

Even worse, its response was to undemocratically ram through far-right austerity policies. The Yellow Vests were the “working-poor class” cemented by the changes in Brussels, and their opponents were the highly-unequal “bourgeois bloc” that only saw the pan-European project in a rainbow glow of total success.

The Yellow Vests disproved the insistence of the Anglosphere - whose cultures are politically conservative - that all populist groups in the West are necessarily on the far-right.

As soon as December 2018, it was clear in France that the Yellow Vests were steeped in left-wing economics, anti-imperialism and a non-Islamophobic, modern conception of healthy patriotism.

This explains the nearly 80 percent approval rate for the movement, and staggering popularity, especially in France which had grown extremely cynical due to undemocratic failures of the pan-European project.

If one word had to be given to describe the Yellow Vests, it would be "civic-minded". Concern for fellow citizens and the downward spiral of non-elite masses is what basically propels such popular revolutions.

These simple, obvious and pro-community concepts are forbidden in the Western mainstream media. There is no “working-poor class” in France. There are only racist, backward, lazy, always-complaining Frenchmen. There is no “bourgeois bloc” but only an elite group of enlightened and deserving technocrats who decide for us what constitutes the “reality”.

These are truly the two classes of the 21st century West - forget “middle class”, because the pan-European project has dealt the final blow to what Reaganomics/Thatcherism began.

Fully understanding and opposing the West’s current social class reality is the second great achievement of the Yellow Vests, but of course, one cannot find class discussed in the English-speaking media.

However, there is another achievement that is even greater but less discussed, probably because it requires a complete overview of modern Western politics, which began in 1789 with the anti-monarchy/anti-aristocrat/anti-privilege French Revolution.

The arrival and the repression of the Yellow Vests remind us all of the undeniable failures of “liberalism”. The Yellow Vests aren’t actually new but are integral to French revolutionary history transported from 1848-71.

The struggle today is the same as it was back then. It's a struggle against elitist liberalism and its attendants: oligarchical and anti-democratic parliamentarianism, free-market chaos, anti-government ideology encapsulated by austerity cuts to social services, and encouragement of a rat race to “become bourgeois”.

The Yellow Vests took France and Europe back to 1848 when the “Second Republic” re-ended the French monarchy and claimed the mantle of the French Revolutionary “First Republic”. Liberalism was installed for the first time and immediately proved that it was plagued by all the problems described above.

Liberalism has proved a failure since 1848, and the liberalist principles (“neoliberal” is more commonly used today to differentiate it from the discredited, original “liberalism”) that underpin the pan-European project have failed today. They always fail.

The arrival, desperate passion and durability of the Yellow Vests are proof of this, and showing the hypocrisy, brutality and ineffectiveness of always-unequal liberalism is the third and greatest and historical achievement of the Yellow Vests.

Liberalism, infamously, does not promise anyone the right to a decent existence. Back in 1848, Karl Marx and other socialists demonstrated these facts about Western liberal democracies. The Yellow Vests have brought us back to these inescapable political and social truths.

Why did the Yellow Vests “fail”? Quite simply because the French government scared people away from it through heavy-handed tactics such as violence, heavy fines, arrests and imprisonment. That’s why their protests slowly dwindled in scale and magnitude - owing to fear of state repression.

The fear has had dramatic, lasting consequences: the French have been reduced from the most politically-active nation in the West to being apathetic and uninvolved - typical of Western liberal democracies.

The apathy surrounding this year’s re-election of French President Emmanuel Macron was completely atypical for the country but it showed there was no stopping the will of the 1 percent and their fanatical “bourgeois bloc” toadies.

The Yellow Vests recently marched to commemorate their fourth anniversary, but you probably didn’t hear about it. You also likely haven’t heard that they’ve been marching every Saturday since “Season 2” began in October 2021, following a year-and-a-half coronavirus pause - which no world leader embraced with more joy and relief than Macron. However, the media blackout on them actually began way back in June 2020.

France is no longer gripped in revolutionary fervor, but the Yellow Vests haven’t gone anywhere. The average person has put their reflective yellow vest back where it belongs by law - in the car - but the network, relationships and experiences created by this extraordinary movement ensure that they will be back one day.

And they will be back. The history of Western liberalism has proven over and over again that the average person’s right to live decently will never be guaranteed.

Ramin Mazaheri is the chief correspondent in Paris for PressTV and has lived in France since 2009.