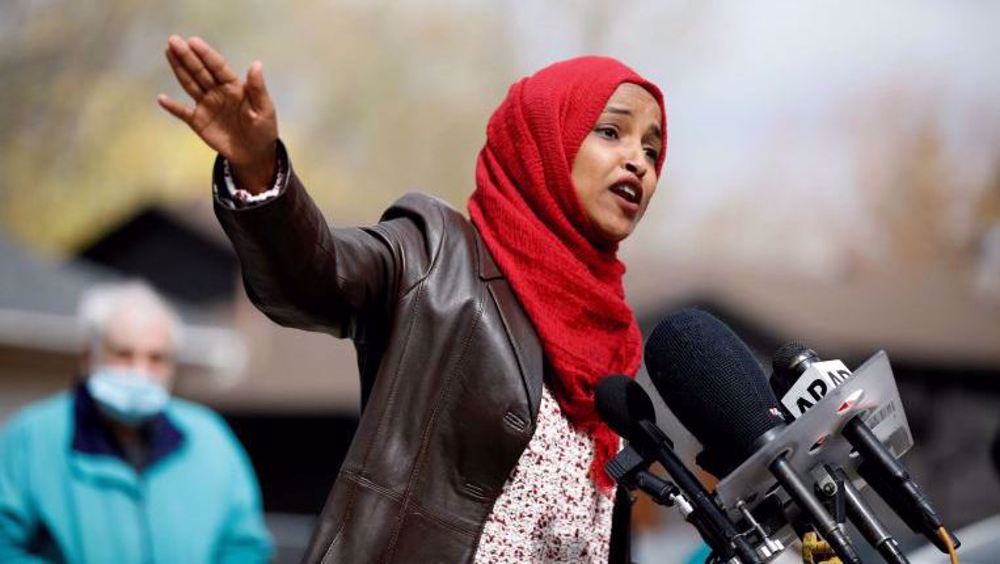 Muslim US Congresswoman Ilhan Omar has hit back at House Minority Leader Kevin McCarthy (R-Calif.) after he vowed to remove Omar from her committee posts over her condemnation of Israel’s war crimes if he becomes speaker of the House.

“From the moment I was elected, the Republican Party has made it their mission to use fear, xenophobia, Islamophobia and racism to target me on the House Floor and through millions of dollars of campaign ads,” Omar said in a statement on Monday.

“Whether it is Marjorie Taylor Greene holding a gun next to my head in campaign ads or Donald Trump threatening to ‘send me back’ to my country (despite the fact that I have been a proud citizen of the United States for more than 20 years), this constant stream of hate has led to hundreds of death threats and credible plots against me and my family,” she added.

McCarthy during an appearance on “Sunday Morning Futures” on Fox News said that Omar wouldn’t be allowed to serve on the House Foreign Affairs Committee, accusing her of “anti-Semitic” remarks.

“Congresswoman Omar, her antisemitic comments that have gone forward, we’re not going to allow her to be on Foreign Affairs,” McCarthy said, referring to the House Foreign Affairs Committee.

On his Twitter account, he said “Last year, I promised that when I became Speaker, I would remove Rep. Ilhan Omar from the House Foreign Affairs Committee based on her repeated anti-Semitic and anti-American remarks. I’m keeping that promise.”

Omar has long been critical of the regime of Israel and its actions in the occupied Palestinian territories.

Along with US Congresswoman Rashida Tlaib, the two have triggered a widespread debate in the US about Israel’s crimes against the Palestinians and American aid to the regime.

Tlaib and Omar, the first two Muslim women elected to Congress, are outspoken critics of Israel’s policies toward the Palestinians and vocal supporters of the Boycott, Divest and Sanction (BDS) movement. The two called “Israel” an “apartheid state” guilty of war crimes.

The 37-year-old US lawmaker is originally from Somalia and represents Minneapolis, Minnesota, a district with a large Somali population.

Omar has accused pro-Israel lawmakers of showing “allegiance to a foreign country,” and has criticized the American Israel Public Affairs Committee (AIPAC) for its role in shaping US policy.

In May 2021, Omar condemned US President Joe Biden for siding with Israel’s oppressive occupation of Palestine and carrying out recent atrocities against Palestinians.

Republicans are set to take control of the House in January and last week voted to nominate McCarthy as Speaker, although 31 Republicans voted against him. In January, McCarthy will need 218 votes to take to the role.

“What it does is gin up fear and hate against Somali Americans and anyone who shares my identity, and further divide us along racial and ethnic lines,” she added. “It is a continuation of a sustained campaign against Muslim and African voices, people his party have been trying to ban since Donald Trump first ran for office.”

Islamophobia in US Congress: Ilhan Omar called a
Islamophobia has reared its ugly head again in the US.

In May 2021, Omar condemned US President Joe Biden for siding with Israel’s oppressive occupation of Palestine and carrying out recent atrocities against Palestinians.

The Muslim congresswoman remains among a minority of US lawmakers who strongly oppose the apartheid regime in Occupied Palestine. She is outspoken against the US selling of arms abroad and fiercely opposes gun laws in the country that allow the purchase of military combat weapons by any individual over the age of 18 with a little background check.