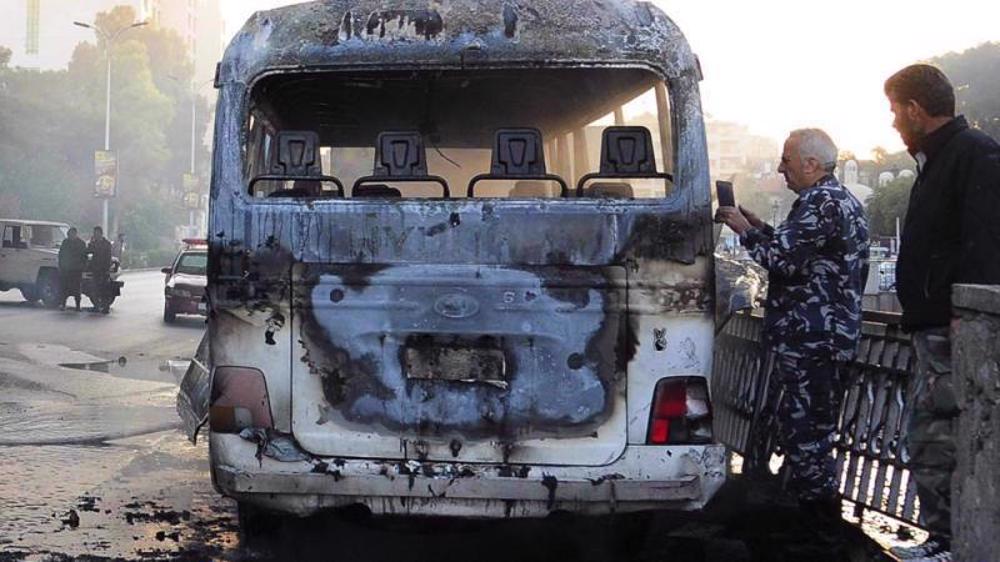 In this picture released by the Syrian official news agency SANA, Syrian security officers gather around a burned bus at the site of a deadly explosion, in Damascus, Syria, on October 20, 2021.

At least 18 Syrian government soldiers have been killed and more than two dozen others injured in a terrorist bomb attack near the capital Damascus.

The deadly attack occurred on Thursday, when an explosive device attached to a military bus in Damascus countryside went off, killing 18 soldiers and wounding 27 others, Syria’s official news agency SANA reported.

“A military bus in Damascus countryside was targeted this morning by a terrorist detonation with an explosive device that was planted in advance,” SANA said, citing a military source.

The terrorist attack is considered to be one of the deadliest ones in months against Syrian government troops not on an active front line.

Attacks in particular have been on the rise, including in the Damascus countryside.

There were no immediate claims of responsibility for the attack, but such assaults bear the hallmark of Takfiri terror factions, particularly the Daesh terrorist group, which was defeated in the Arab country but its remnants launch sporadic attacks against civilians and government troops.

Since 2011, Syria has been gripped by foreign-backed militancy, leading to the emergence of Daesh and other terrorist groups in the Arab country.

The Syrian government has repeatedly condemned the US and the EU for waging economic terrorism on the country through their unilateral sanctions, holding them responsible for the suffering of the Syrian people, especially now that the country is grappling with a deadly coronavirus outbreak.

Damascus has also been critical of the United Nations for keeping silent on the destructive role of the US and EU, among other parties supporting terrorism in Syria.