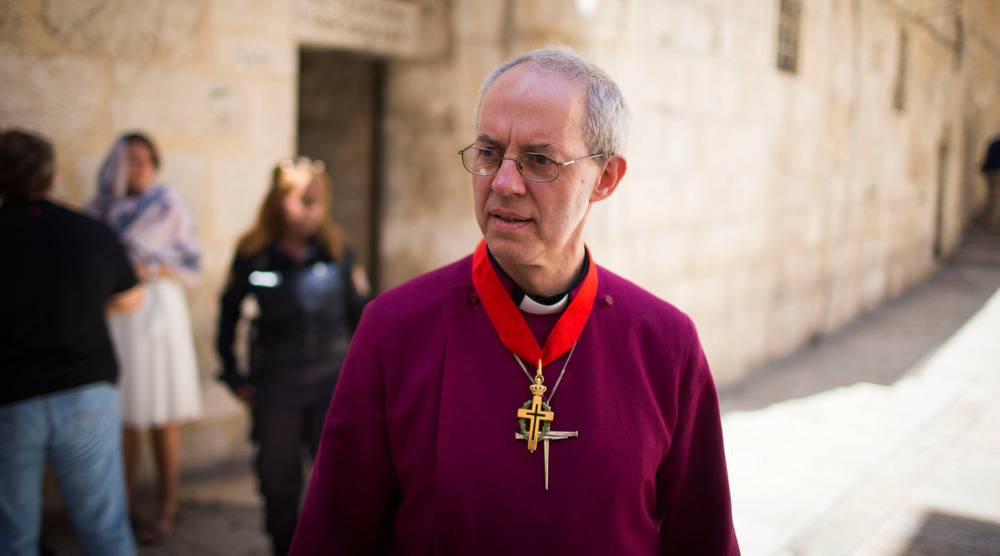 Archbishop of Canterbury Justin Welby visits the church of the Holy Sepulchre on June 28, 2013, in the Old Cit of al-Quds. (Via Getty Images)

The archbishops of Canterbury and Westminster have expressed concern about the consequences of moving the British embassy from Tel Aviv to occupied al-Quds, asking the prime minister to reconsider her decision.

According to a spokesman, the Archbishop of Canterbury Justin Welby raised concerns about the decision, which was made by British Prime Minister Liz Truss last month during a meeting with her Israeli counterpart Yair Lapid.

The spokesman told Middle East Eye that the archbishop is concerned about the possible consequences of the decision before a bilateral agreement is reached between the Palestinians and the Israeli regime.

The spokesman added that Welby is in contact with Christian leaders in the occupied territories and is praying for peace in al-Quds.

Moving the embassy to occupied al-Quds will change Britain’s long-standing position on the Palestinians. Britain has long maintained its embassy in Tel Aviv as part of its longstanding policy.

By moving the British embassy to occupied al-Quds, Truss would be following in the footsteps of Donald Trump, the former President of the United States, who moved the US embassy to al-Quds despite worldwide condemnations.

The Anglican and Catholic churches announced in a statement that they stand shoulder to shoulder and oppose the possible transfer of the British embassy to the holy city.

The Archbishop of Canterbury made his concerns public hours after Britain’s most senior Catholic warned in a letter to Truss about the consequences of her decision.

Nichols, head of the Catholic Church in England and Wales, said he had written to the prime minister expressing his deep concern over the move.

“Such a relocation of the UK embassy would be seriously damaging to any possibility of lasting peace in the region and to the international reputation of the United Kingdom,” he said.

The cardinal added that Pope Francis and leaders of churches in Israel and Palestine had “long called for the international status quo on occupied al-Quds to be upheld, in accordance with the relevant UN resolutions.”

Meanwhile, other churches in the UK may also oppose the decision.

Four years ago, all 13 Christian denominations gathered in occupied al-Quds to condemn Trump’s decision to move the American embassy there.

They announced in a joint statement that the action will definitely increase hatred, conflict, violence and suffering in al-Quds and the occupied territories and is a serious threat to unity in the world.

The Muslim Council of Britain also said in a letter to the Truss that the decision is a sign of “legitimizing the occupation of East Occupied al-Quds by Israel.” The organization has also warned that the action of the authorities could damage the international image of Britain.

The Labor Party, the Liberal Democrats, and the Scottish National Parties have all announced that they are against the decision and will fight against it.

Arab envoys urge UK’s Truss not to move embassy to occupied al-Quds
The Arab ambassadors say that the plan could jeopardize talks on a free trade deal between the UK and the Persian Gulf Cooperation Council.

The plan was first proposed by Truss in a letter to Conservative Friends of Israel (CFI), a pro-Israel lobby group, earlier this year.

Israel lays claim to the entire al-Quds, but the international community views the city’s eastern sector as occupied territory while Palestinians consider it the capital of their future state.

Last month, the Palestinian foreign ministry said the Israeli regime has no rightful claim or sovereignty over the occupied al-Quds, adding that the possible move by the UK would amount to “complicity in Israel’s illegal annexation of the city.”

The Palestinian resistance movement Hamas also said the relocation of the British embassy would not give any legitimacy to the Israeli regime.

Romania: No decision to move Israel embassy to al-Quds