A northern California wildfire raging in the foothills of the Cascade range has claimed three lives, officials said on Monday, as a separate blaze prompted mass evacuations and spread turmoil to the famed wine-producing regions of Napa and Sonoma counties.

The three fatalities in the so-called Zogg Fire in Shasta County, which erupted on Sunday near Redding, about 200 miles north of San Francisco, were reported by the county sheriff and the California Department of Forestry and Fire Protection (CalFire). They were all civilians.

No further details about the victims or how they perished were immediately provided. But the deaths bring to 29 the number of people killed since mid-August in a California wildfire season of historic proportions.

The Zogg fire, which has destroyed 146 structures and charred 31,000 acres of grassy hillsides and oak woodlands thick with dry scrub, coincided with the outbreak of another conflagration in the heart of California’s wine country north of the Bay area.

That blaze, dubbed the Glass Fire, has spread across 36,000 acres of similar terrain in Napa and Sonoma counties since early Sunday, incinerating more than 100 homes and other buildings, forcing thousands of residents to flee and threatening world-renowned vineyards, according to CalFire.

Both fires were listed at zero containment as of Monday evening. The cause of each was under investigation.

They marked the latest flashpoints in a destructive spate of wildfires this summer across the Western United States.

In California this year, wildfires have scorched 3.7 million acres (1.5 million hectares) since January - far exceeding any single year in state history. They have been stoked by intense, prolonged bouts of heat, high winds and other weather extremes that scientists attribute to climate change.

More than 7,000 homes and other structures have burned statewide so far this year. 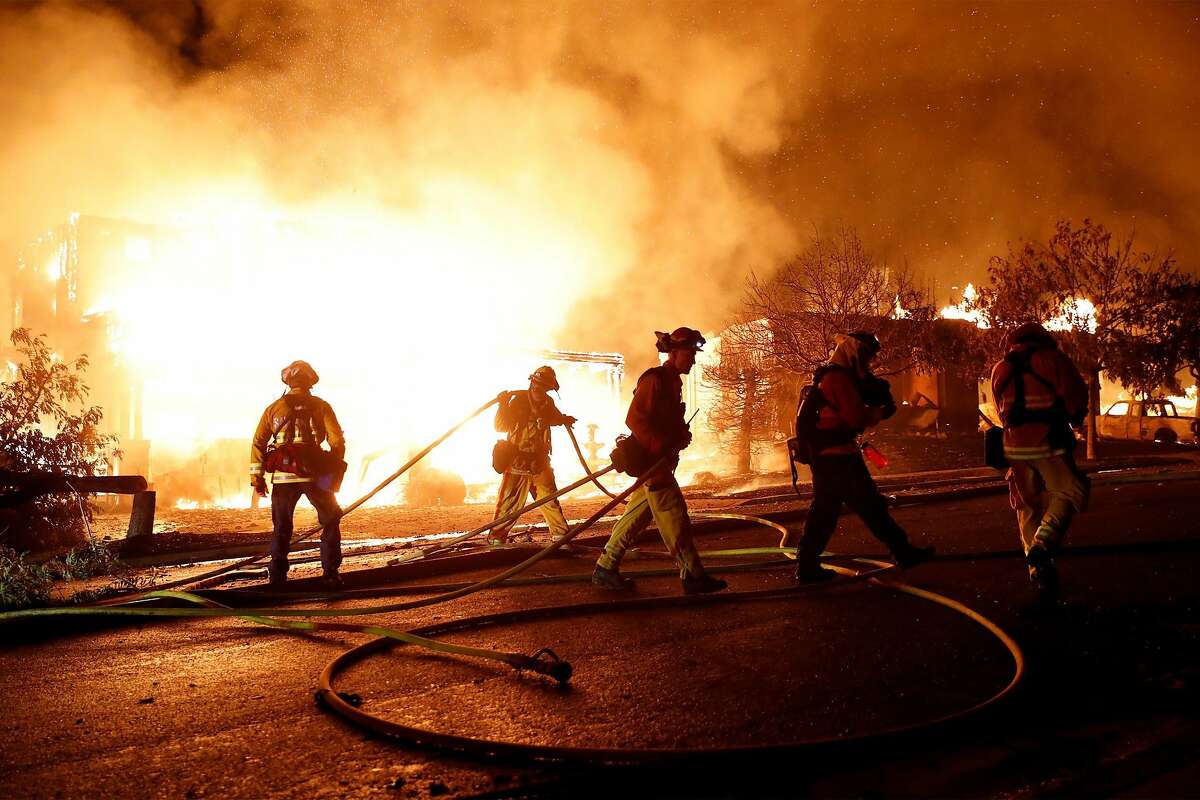 The Glass Fire broke out in Napa Valley before dawn near Calistoga before merging with two other blazes into a larger eruption of flames straddling western Napa County and an adjacent swath of Sonoma County.

In one notable property loss, the mansion-like Chateau Boswell winery in St. Helena - a familiar landmark along the Silverado Trail road running the length of the Napa Valley - went up in flames on Sunday night.

An estimated 60,000 residents have been placed under evacuation orders or advisories in Sonoma and Napa counties combined, but no injuries have been reported.

Not everyone heeded evacuation orders.

As neighbors around him fled, Santa Rosa resident Jas Sihota perched himself on his front porch with a garden hose, darting out every 15 minutes or so to douse nearby spot fires seeded by wind-blown embers under a hazy red sun.

Sihota, a radiology technician at a nearby hospital, said he had not slept in some 24 hours.

“I wouldn’t have a house if I didn’t stay,” said Sihota. At least 10 homes elsewhere on the street beyond the reach of his hose were destroyed.

In 2017, roughly 5% of Santa Rosa’s homes were lost when downed power lines sparked a devastating firestorm in October that swept the region, killing 19 people.

The Glass Fire struck about midway through the region’s traditional grape-harvesting season, already disrupted by a spate of large fires earlier this summer.

Several Napa Valley growers said recently they would forgo a 2020 vintage altogether due to smoke contamination of ripening grapes waiting to be picked.

The 475 vintners in Napa Valley alone account for just 4% of the state’s grape harvest but half the retail value of all California wines sold. Sonoma County, too, has become a premiere viticulture region with some 450 wineries and a million acres of vineyards.

The full impact on the region’s wine business remains to be seen and will differ for each grower, depending on how far along they are in the harvest, said Teresa Wall, spokeswoman for the Napa Valley Vintners trade group.

“There are some who were close to wrapping up, and some who were still planning to leave their grapes hanging out there for a while,” she said.

The fires caused major upheavals for the area’s most vulnerable residents already grappling with the coronavirus pandemic.

The Adventist Health St. Helena hospital was forced to evacuate patients on Sunday, the second time in a month following a lightning-sparked wildfire in August.

On Monday, residents at Oakmont Gardens, a Santa Rosa retirement community, leaned on walkers and waited to board a bus taking them to safety, their face masks doubling as protection against smoke and COVID-19.

Over 100,000 homes and business have suffered power outages across northern California since Sunday, some from precautionary shutoffs of transmission lines to reduce wildfire risks in the midst of extremely windy, hot, dry weather, Pacific Gas and Electric Co reported.

US Coast Guard reports 39 missing from capsized boat off Florida

Dr. Fauci says Omicron-specific vaccine may not be needed

VIDEO | UNICEF calls for immediate assistance to save Afghan children1hr

US backs down, responds to Russia's demands, seeks dialogue5hr

Iran oil and gas sector to grow 19.5% in year to March: Sturdy7hr

Iran: UK can't shy away from its responsibility for violating JCPOA7hr