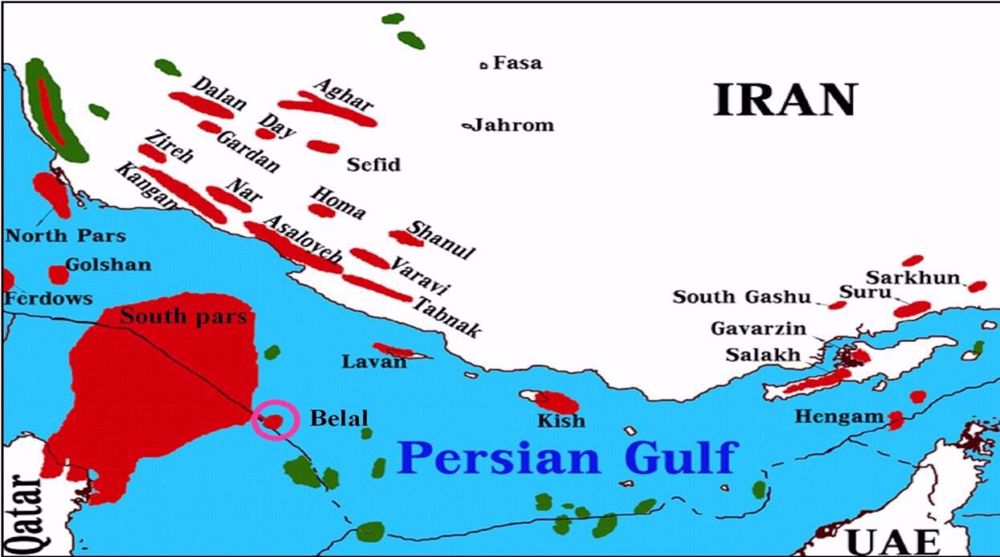 The pink circle on the map above shows the location of Belal gas field on the maritime border between Iran and Qatar in Persian Gulf.

An Iranian oil and gas company commissioned for development of the Belal gas field in the Persian Gulf says it has finally reached gas from its exploration well in the field which is located on the maritime border between Iran and Qatar.

CEO of Pars Oil and Gas Company (POGC) Mohammad Hossein Motajalli said on Monday that gas from a first layered reservoir of Belal had reached the surface during a drilling operation a day earlier.

“The gas torch on the well is now burning,” said Motajalli, adding that exploration drilling in the field had started in early June.

The POGC won a contract to develop Belal gas field in 2019 amid efforts by Iran to rely more on domestic companies for large-scale projects in its petroleum sector after foreign firms withdrew from the country under pressure from the United States.

The company aims to produce 500 million cubic feet (over 14 million cubic meters) per day of natural gas and some 15,000 barrels of gas condensates from the field once it is fully developed.

The exploration of the field comes amid Iran’s plans to further increase its natural gas output to respond to a growing demand for energy in the country.

He said a 150-kilometer pipeline and other installations will be constructed to transfer sour gas produced in the field to onshore refineries, adding that a contract for construction of  large jacket platform had been awarded to Iranian company SADRA.

Belal is located some 30 kilometers to the southeast of South Pars, the world’s largest gas field which is shared between Iran and Qatar in the Persian Gulf.