The real, bigger winner of 2022 FIFA World Cup is Palestine 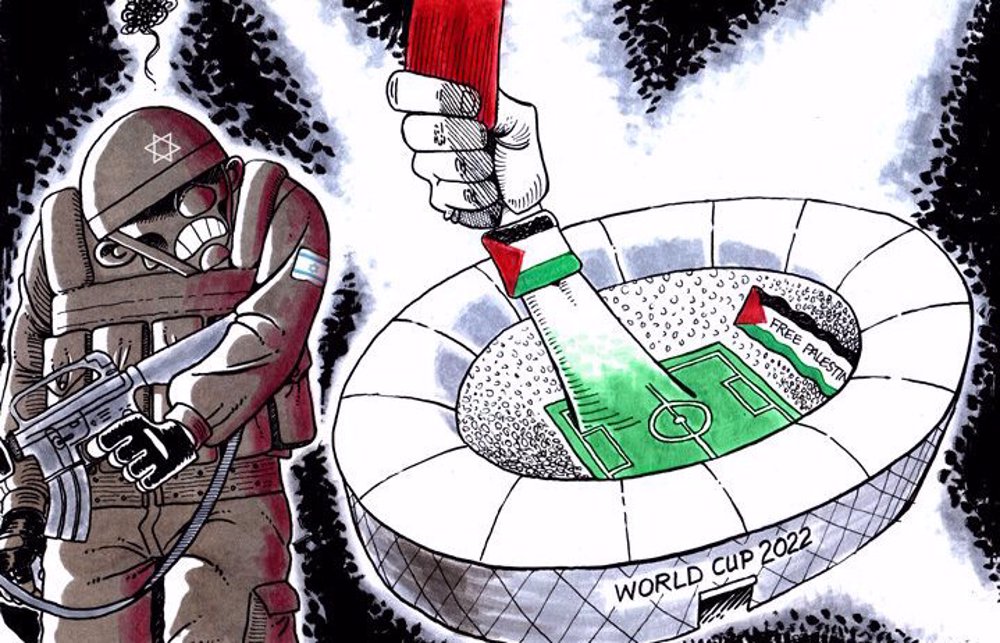 Pro-Palestine sentiment has been on full display at the 2022 World Cup in Qatar. (Illustration by Khamenei.ir)

The just-concluded 2022 FIFA World Cup in Qatar made one thing amply clear — the illegitimate Israeli regime's desperate attempts to gain legitimacy in the Arab world is a goal it will never be able to score.

Since the tournament kicked off last month, amid tremendous fervor, football fans from different countries made no secret of their affection and admiration for the people of Palestine while denouncing their occupiers.

The Palestinian flag was often seen fluttering in the packed football stadiums with spectators raising vociferous slogans in support of the Palestinian cause and against the Israeli apartheid regime's atrocities in the occupied territories.

Viral videos on social media showed Israeli journalists ruing how they were kicked out of taxis, pushed away from restaurants and booed on the streets by people who told them “you kill our brothers.”

These Israeli reporters received “chilly” responses, according to the Israeli media. They were refused interviews and interrupted during live broadcasts, forcing them to keep their identity under wraps.

Many of them were turned away with brutally blunt words, such as: “It’s Palestine; there is no such thing as Israel.”

The reporters, evidently exasperated, told Israeli media channels that they had been fooled into believing that the Arab world was in their favor, as they were shaken up by anti-apartheid sentiments among people present in Doha, mainly Arabs but also people from Asia, Europe and Africa.

Before the tournament, in a move that made the regime furious and sparked outrage among Israelis, the illegitimate entity quite rightly was not listed among the Middle East "countries" in a section of the FIFA website that provided information about hospitality packages for the marquee sports event.

The site rather mentioned the “Occupied Palestinian Territories”.

The fact that Israeli tourists and journalists were given cold shoulder in Doha, Palestinians were welcomed and the Palestinian flag was held aloft inside the stadiums and on the streets made this year's FIFA World Cup memorable for Palestinians and all also advocating their just and legitimate cause.

The one football team that particularly deserves credit for mainstreaming the issue of Palestine at the biggest sporting event was Morocco. The first African and Arab country to reach the semifinals of the FIFA World Cup, Atlas Lions won millions of hearts in Qatar.

More importantly, they championed the cause of Palestine in a way no other team did. Moroccan players were seen celebrating their victories with the Palestinian flag.

Interestingly, the Palestinian flag was the only non-official flag to appear at this year's World Cup amid an outpouring of unprecedented support for Palestine, which has been under Israeli occupation since 1948.

Over the years, the Israeli regime has killed around 100,000 Palestinians, and forcibly expelled tens of thousands of others from their homes. As of 2022, more than 6.4 million Palestinian refugees wait to return home.

Even during the final match on Sunday, when reigning champions France was defeated by resurgent Argentina to claim the coveted title, many Palestinian flags were spotted in the spectator stands, making many people proclaim that this year the real winner was Palestine.

In 2020, five Muslim-majority countries — the United Arab Emirates, Bahrain, Kosovo, Morocco and Sudan — signed so-called normalization deals with the Israeli regime. However, this World Cup made it clear that the sham deals do not reflect the popular opinion in the Arab world.

The voice of football fans in Qatar was louder than the propaganda perpetuated by corporate media outlets in the West that spend billions of dollars to support the pro-Israeli narratives.

The World Cup is over, but the solidarity with Palestine continues.

Hiba Morad is a Tehran-based academic and political analyst, currently pursuing a Ph.D. in linguistics at the University of Tehran.