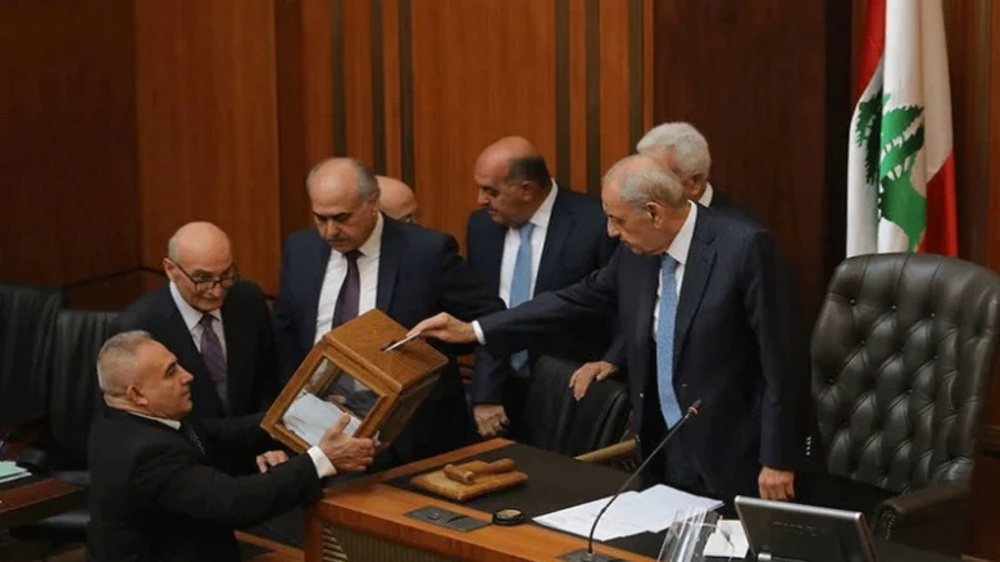 The Lebanese parliament has failed to elect a new president for the ninth time amid deepening political stalemate exacerbated by the US sanctions and foreign meddling.

The Lebanese news channel al-Manar reported on Thursday that the country’s parties at the 128-seat parliament failed again to elect a new president after blank votes received the highest count and independent lawmaker Michel Moawad, who is seen as close to the United States, won the support of 39 MPs but fell well short of the required majority.

The Lebanese constitution stipulates that a candidate must receive the approval of two-thirds of the parliament's 128 members.

Parliament speaker Nabih Berri adjourned the session due to a lack of quorum after the second voting cycle on Thursday and announced December 15 as a date for the tenth session of the country’s legislature to elect a new president.

Berri said he was working to hold dialogue between Lebanese parties and factions, reiterating calls on lawmakers to find a consensus candidate to prevent the process dragging on for months.

The Lebanese parliament speaker also announced that he would turn the next week’s presidential election session into a parliamentary dialogue if the blocs agree to such a move.

“I will explore the opinion of all colleagues and parliamentary blocs regarding the issue of dialogue. If it turns out to be positive, I will turn next Thursday’s session into a dialogue session in parliament,” Berri said.

Last week, parliamentarian sources said the situation in Lebanon has reached a “dangerous stage” since none of the local parties or blocs gave an absolute mandate to any of the contenders as the country flounders in a deep economic and social crisis worsened by foreign interference in its internal affairs.

A well-informed source told al-Akhbar newspaper that France, which has been playing the role of proxy for the US, is pushing to end the presidential deadlock by promoting a West-leaning candidate that may also be endorsed by Hezbollah.

Hezbollah won’t accept new Lebanese president subservient to US, Israeli regime
A high-ranking Hezbollah official says the Lebanese resistance movement will not accept a new president who would capitulate to the US and the Israeli regime.

Information obtained by al-Akhbar also indicated that Saudi Arabia seeks a “comprehensive settlement” in Lebanon, with the source underscoring disagreement between the Saudis and the Western camp. While Riyadh prefers naming Ambassador Nawaf Salam as the prime minister in any future government, Paris and Washington back former PM Najib Mikati for the premier's post.

Above all, the United States seeks to fuel political instability and economic crisis in Lebanon to weaken the country's resistance as a favor for the Israeli regime, the key US ally in the region.

Since late 2019, Lebanon has been mired in a deep financial crisis that has caused the Lebanese pound to lose around 90 percent of its value to the US dollar and led its banking system to collapse, plunging the bulk of Lebanese into poverty. The economic and financial crisis is mostly linked to the sanctions that the United States and its allies have imposed on Lebanon and foreign intervention in the Arab nation’s domestic affairs.