It is "unthinkable" for the foreign policy establishment of Germany to take any position against the interests of Israel, says an academic of Germany's relationship to the issue of Palestine explained in terms of the country's past and its affinity for Israel.

David Miller, an academic and former professor at Bristol University and a leading British scholarly critic of Israel, made the comments during Press TV's Palestine Declassified program aired on Saturday.

"It is literally unthinkable for the foreign policy establishment of Germany to take any position which is in any way against the interests of Israel," Miller said describing Germany's pro-Zionist stance as a result of the "guilt" which has become a part of the country's "political culture."

It is traditionally believed that the Germans are still trying to atone for the Nazi genocide against the Jews, meanwhile, Germany is a hostile territory for Palestinians.

Germany is the only place in the world outside Palestine where it is effectively illegal to wave a Palestinian flag. Earlier this year, the Berlin police banned all pro-Palestine demonstrations. By contrast, neo-Nazi admirers of Hitler's regime were free to meet and fly the German imperial flag. They were left unmolested so something more fundamental is going on. 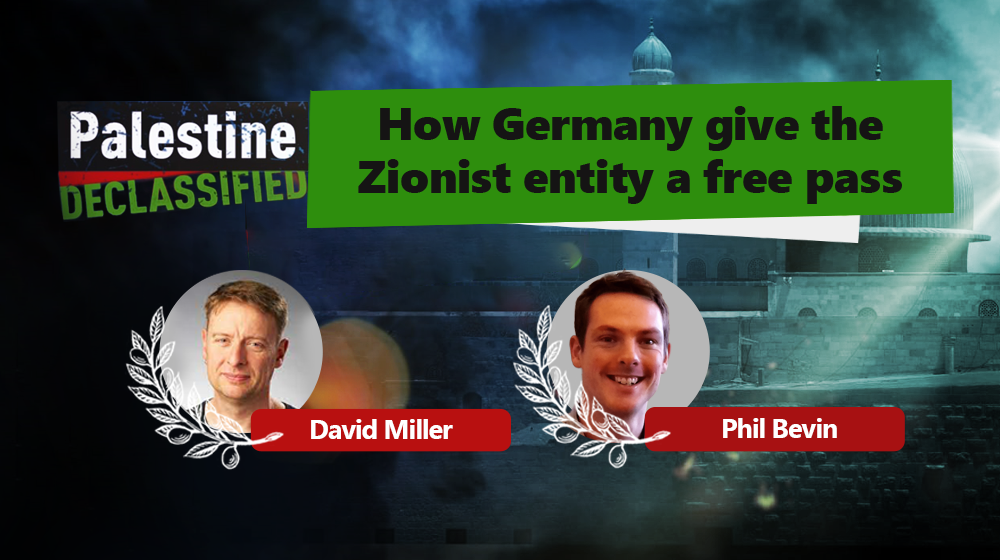 Die Linke and Palestine
Die Link on the one hand it has previously claimed to support Palestinian rights on the other it has shied away for any expression of those rights and has even equated BDS with anti-Semitism.

Over the years, Zionist leaders have met with German counterparts starting with the first chancellor of West Germany after the 1939-45 War, Konrad Adenauer, and carrying on ever since.

In 2008 former German Chancellor Angela Merkel addressed the Knesset saying that Germany had a special responsibility for the security of Israel.

"Every German government and every German chancellor prior to me were committed to Germany's special historical responsibility for Israel's security," Merkel said.

In 2019, The German parliament voted to condemn BDS as anti-Semitic. BDS or Boycott, Divestment and Sanctions movement is an international campaign aimed at delegitimizing and pressuring Israel through diplomatic, financial, professional, academic, and cultural isolation of Israel, Israeli individuals, and Israeli institutions who support Israel’s right to exist.

Underlying this capture of German foreign and domestic policy by the Zionists is the influence of the US and the failure of denazification after the war.

The North Atlantic Treaty Organization (NATO) was a means to contain both the Soviet Union and Germany in the US interests. Declassified files show that the State Department Intelligence saw NATO as a place to help West Germany satisfy its reasonable aspirations and contain any potentially unreasonable ones.

In addition, the Central Intelligence Agency (CIA) actively set up the intelligence service of West Germany, the Bundesnachrichtendienst known as the BND. The CIA knew that the head of the agency, General Reinhard Gehlen, was a former Nazi and approved his appointment, even though he employed numerous former Nazis and known war criminals.

Gehlen made contact with the national intelligence agency of Israel, Mossad, in 1957, and in 1967, an ex-Nazi officer in Gehlen's group passed on information to Mossad on Syria and Egypt, enabling Israel to destroy a large part of the Egyptian and Syrian air forces with a preemptive strike.

Miller said the intelligence passed through the ex-Nazi officer in Gehlen's organization to the Mossad, allowed the Israeli defense force to eliminate the Egyptian and the Syrian air force and thus allowed them much more easily to occupy the territories which are still occupied.

Phil Bevin, who worked in the UK's Leader of the Opposition's office under Jeremy Corbyn, also told Press TV  that there has been a "close cooperation" between the BND and the US, saying that in 2014 National Security Agency (NSA), a national-level intelligence agency of the United States Department of Defense, and BND wiretapped and listened to German politicians.

"So the question is, whether or not the BND is working primarily for Germany or the US, and I don't think that has been properly addressed yet," he stated.

"I don't know exactly if BND is currently an asset of the CIA," Bevin said, noting that "we've got German allies, working against the interests of the German people and possibly with the support of the German state, which is which is a bizarre situation to be in."

The German left party, known in Germany as Die Linke has an appalling record on Palestine. Back in 2011, it was condemned by the BDS National Committee for patently false, intellectually, and morally dishonest claims that equated calls for the boycott of Israeli goods with anti-Semitism.

Die Linke's leadership has been very hostile to the concept of justice for the Palestinian people, rather than being the radical left-wing alternative it claimed to be when it was established.

In 2019, when the German parliament overwhelmingly voted to condemn BDS as anti-Semitic some Die Linke members voted for it, while others put a contending motion, also opposing BDS.

Why is Die Linke particularly bad on BDS and Palestinian rights, is partly due to the overwhelming subservience of German politics, both to the US and to Zionism and Israel.

The extent to which Die Linke is designed to control the left rather than give expression to its demands was highlighted in the US State Department cable released by Wikileaks, where the party's parliamentary leader Gregor Gysi, told US ambassador Philip Murphy that the left's party's official policy on NATO, that it should be abolished and replaced by a new security alliance, including Russia, was only a ruse to avoid the more dangerous path of pulling Germany out of NATO.

Die Linke today is in crisis and even its own leaders have remarked on its inconsistent and contradictory approaches to many major issues including the NATO proxy war in Ukraine. Die Linke is at best, controlled opposition and is a clear obstacle to developing support for the liberation of Palestine in Germany.