Workers collect poppy tears, or raw opium, at a plantation of poppies in Zhari district in Kandahar, Afghanistan, on March 28, 2022. (Photo by AFP)

Iranian Deputy Foreign Minister Ali Bagheri-Kani says the production of opium in Afghanistan has increased by 50 times since the US-led invasion of the South-Central Asian country in October 2001.

Bagheri-Kani made the remarks at an international conference dubbed “The 21st Century and a World free from American Dominance” in the capital Tehran, stating that the output of opium made from poppy seeds in Afghanistan soared dramatically following the deployment of US military forces there.

“In the recent time, both Americans’ decisions and actions, such as their presence in Afghanistan and Iraq, have proven to be ineffective and not constructive,” he said.

“Nowadays the United States tends to draw on its force more than its might,” the top diplomat added. 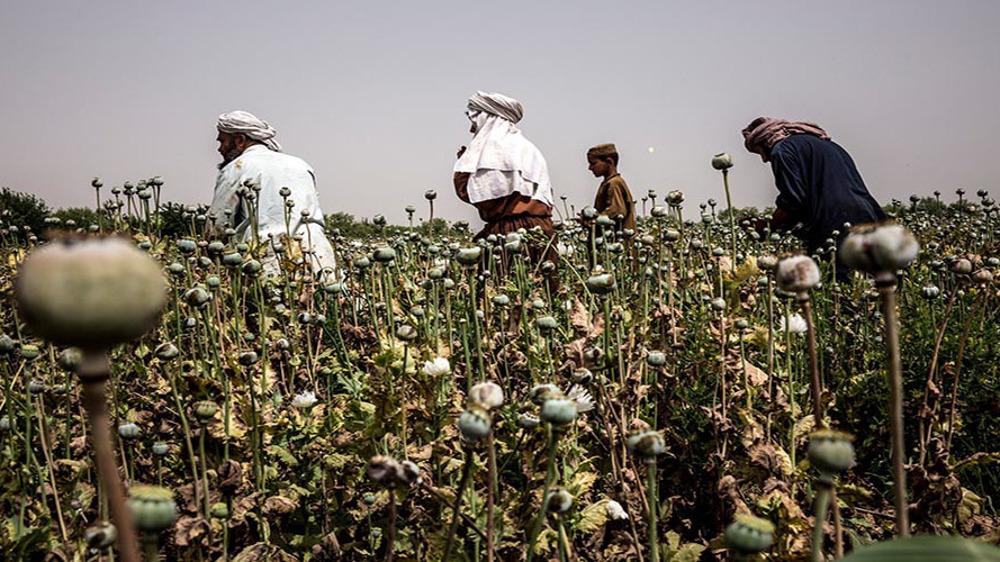 Prior to the invasion of Afghanistan, opium production was banned by the Taliban, although it still managed to exist.

The US and its allies have been accused of encouraging and aiding opium production and the ongoing drug trafficking within the region.

Only a small fraction of the total opium yield in Afghanistan is destroyed. The international community has also failed to curb heroin production in Afghanistan since the devastating military campaign.

Afghanistan is thought to produce more than 90 percent of the world’s supply of opium, which is then used to make heroin and other dangerous drugs that are shipped in large quantities all over the world. Opium production provides many Afghan communities with an income, in an otherwise impoverished and war-torn country.

Nearly half of the drugs produced in Afghanistan are moved through Pakistan, according to the United Nations Office on Drugs and Crime (UNODC).

Iran official: US planes transporting illicit drugs in Afghanistan
The United Nations says more than 80 percent of the world’s opium is produced in Afghanistan.

According to UNODC findings, cultivation of opium poppies in Afghanistan increased by 32 percent over the previous year, to 233,000 hectares – making the 2022 crop the third largest area under cultivation.

Cultivation continued to be concentrated in the southwestern parts of the country, which accounted for 73 percent of the total area, registering the largest crop increase.

In Helmand province, one-fifth of all arable land was dedicated to opium poppy cultivation.

The notorious Daesh Takfiri terrorist group in Afghanistan, better known as Daesh in Khorasan Province, is reported to have recently taken over opium production and trafficking.