An anti-Muslim decision by the French Senate to ban wearing hijab at sports competitions has faced harsh criticism from the country’s Muslim community and social media users across the world.

French lawmakers in the upper legislative house voted late on Tuesday in favor of amending a proposed law stipulating that the wearing “of conspicuous religious symbols is prohibited” in events and competitions organized by sports federations in France.

Particularly targeting the Muslim headscarves and veils, the amendment claimed that the hijab — a headdress worn by Muslim women — can put the safety of athletes wearing it at risk.

The amendment — proposed by the right-wing group Les Republicains — instantly sparked a popular backlash, with critics taking to social media to lambaste the French government and cast doubt on France’s commitment to its self-proclamation as the “land of liberty.”

Commenting on the decision, TV presenter Samia Mohsin described the ban as an act of “exclusion and discrimination,” stressing, “Islamophobia is not the answer!” to France’s crisis of identity.

“Liberté? Or exclusion & discrimination? Senators in #France voted in favour of #HijabBan in #sports,” Mohsin wrote in a tweet. “The amendment was proposed by right-wing Les Republicains & opposed by the French government. #Islamophobia is not the answer.”

Senators in #France voted in favour of #HijabBan in #sports

The amendment was proposed by right-wing Les Republicains & opposed by the French government #Islamophobia is not the answer
https://t.co/NWCNs2fxFZ

Another Twitter user slammed France for its decision to pick on Muslims and Islamic symbols while ignoring more critical challenges facing the European country.

“Of all urgencies facing France, the Senate has decided to ban the Muslim hijab in sports. It will be on the majority of the French to decide what matters, food on the table a future for their kids, or constant islamodiversion and a sense of superiority towards their Muslim neighbors,” the tweet reads.

Another commenter suggested that a decision like the banning of the hijab will make the situation “worse” for Muslim women in France.

“France already banned the niqab & prohibits mothers wearing hijab from accompanying their children on school trips. France knows they can get away w/ this without any repercussions,” she wrote.

The amendment was adopted with 160 votes in favor and 143 against. A commission composed of members from the Senate and the lower house is supposed to gather to find a compromise on the text before it is published.

It is unclear whether the ban would be implemented for the 2024 Paris Olympics.

The move is seen as yet another Islamophobic attack targeting the country’s persecuted Muslim minority community, which have seen deep marginalization and witch-hunt in recent years.

In July last year, the lower house of the French parliament approved a controversial bill targeting religious freedom and stigmatizing Muslims, while tightening rules on the funding of mosques, associations, and non-governmental organizations belonging to Muslims.

The bill also targeted Muslim girls under the age of 18 by banning the wearing of hijab in public places.

Months earlier, French President Emmanuel Macron had unveiled a plan to defend what he called France’s secular values against “Islamist radicalism” and claimed that the religion was “in crisis.”

In 2020, two Muslim women wearing headscarves were stabbed near the Eiffel Tower in Paris amid heightened racial tensions, but French state media chose to stay silent on the incident. It came after the killing of a French teacher by an extremist outside his school for showing derogatory cartoons of Prophet Muhammad (PBUH) during his class.

This gave an excuse to the French president as he defended the profane caricatures and introduced the legislation targeting so-called Islamic extremism.

The deeply offensive caricatures set off angry protests worldwide. Inside France, a crackdown on the Muslim community saw multiple mosques forced to close, the country’s biggest Muslim charity and an anti-Islamophobia organization banned, and dozens of people arrested.

More than 5 million Muslims live in France, who account for the largest Muslim population in Europe, along with German Muslims. 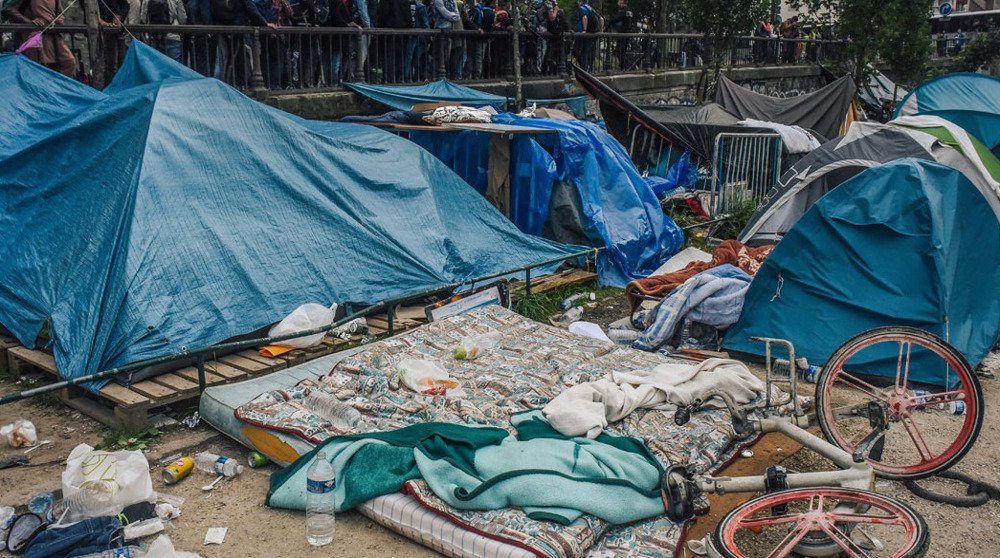 Russia turns to Iranian tractors to plow its farms 35min

Ghana braces as Sahel war spills into Gulf of Guinea35min