Is Wesley Clark's prediction of US war with Iran moving closer to realization?

The United States is moving to a point of confrontation and crisis with Iran, according to retired US General Wesley Clark. A warning that Iran has been a target of malicious US intentions issued more than a decade ago appears to be moving closer to realization following the US assassination of Iranian General Soleimani in Iraq.

US President Donald Trump and his hawkish foreign policy advisers such as Secretary of State Mike Pompeo have been stepping up pressure against Iranians in the wake of Trump’s withdrawal from the 2015 Iran nuclear deal.

Trump’s policy on Iran has been defined by military threats and economic sanctions. He adopted a hostile approach from day one.

On January 3, the US military carried out an airstrike on the order of Trump at Baghdad’s international airport, assassinating General Soleimani and the second-in-command of Iraq's Popular Mobilization Units (PMU), Abu Mahdi al-Muhandis, as well as eight other companions.

Iran responded by launching missiles at Iraqi military bases that house US troops.

The US secretary of state said the assassination was part of a “bigger strategy of deterrence,” and Trump claimed the prominent anti-terror commander was "saying bad things about our country."

Earlier, Trump said Soleimani posed an impending threat to the United States but also said that was not important given his past, after NBC News revealed that Trump had authorized the US military to assassinate General Soleimani seven months ago.

Independent analysts have said General Soleimani’s assassination by the Trump administration was “an act of war on Iraq where he was killed and on Iran where he served for decades with courage, dedication, and distinction — from US-orchestrated Iraqi aggression on Iran in the 1980s until his US state-sponsored murder.”

General Soleimani was fighting in Iraq against Daesh which the US created as a result of its illegal invasion and occupation of Iraq.  Soleimani was a brave, selfless and resourceful Iranian commander who fought US-backed terrorists in Iraq and Syria.

Democratic presidential contenders have said that Trump’s action has put the United States on a warpath with Iran. They condemned Trump from ordering the deadly strike and said his decision was reckless and could lead the United States to another war in the Middle East.

Trump’s action puts US on warpath: Democratic White House contenders
Trump has said he authorized the assassination of the Iranian commander “to stop a war,” but his Democratic presidential contenders have said that his action has put the US on a warpath.

Senator Bernie Sanders warned that a war with Iran which would be worse than the Iraq War. Representative Tulsi Gabbard, he 38-year-old Iraq war veteran, also warned Trump that war with Iran will make previous wars in the Middle East region look like "a picnic."

Tulsi Gabbard: War with Iran would make Afghanistan, Iraq wars 'look like a picnic'
US presidential candidate Tulsi Gabbard has warned President Trump that war with Iran will make previous wars in the Middle East region look like "a picnic."

Clark, the retired 4-star US Army general and Supreme Allied Commander of NATO during the 1999 War on Yugoslavia, said in the 2007 interview that the purpose of the 9/11 attack was to take out the governments of seven countries in five years. These seven countries were Iraq, Syria, Somalia, Libya, Sudan, Yemen, and Iran.

The interview serves as a reminder regarding the diabolical timeline of the American Empire’s hegemonic project. All of these countries have been directly or indirectly been the object of US aggression. 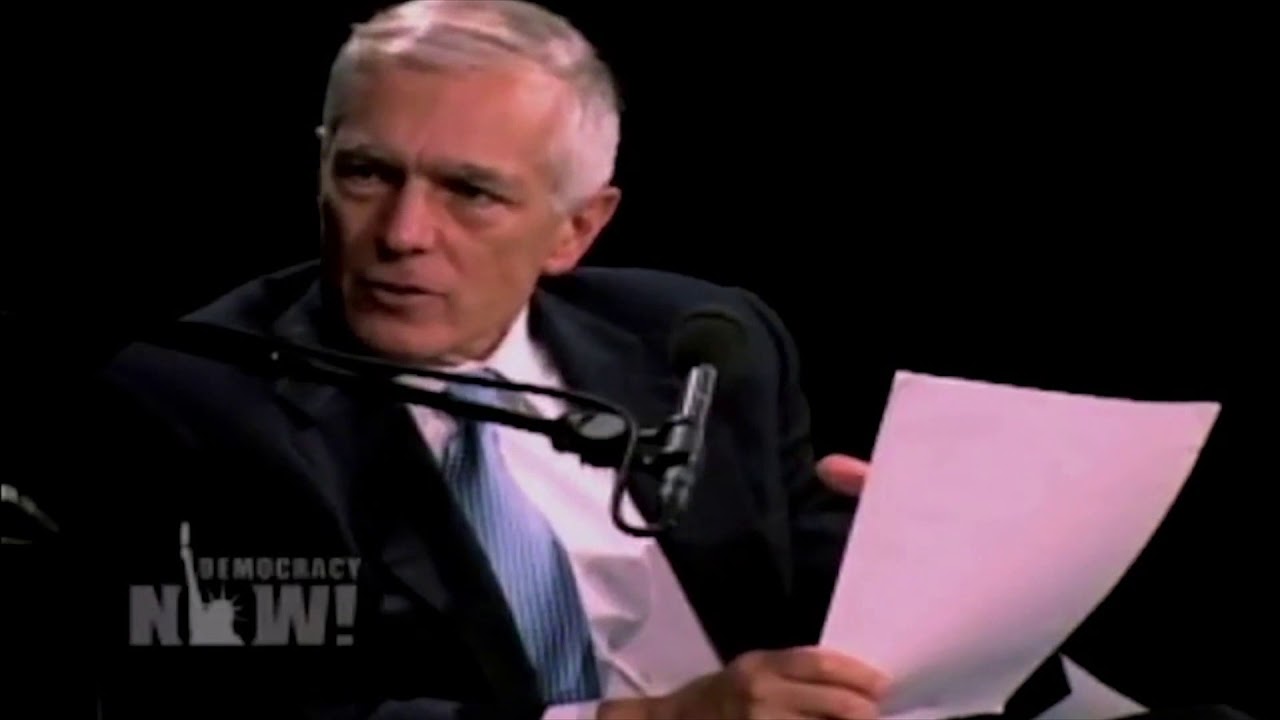 Following are excerpts of General Clark’s interview with Amy Goodman, the host of Democracy Now! -- an hour-long American TV, radio and internet news program hosted by Goodman and Juan González.

AMY GOODMAN: Now, let’s talk about Iran. You have a whole website devoted to stopping war.

AMY GOODMAN: Do you see a replay in what happened in the lead-up to the war with Iraq — the allegations of the weapons of mass destruction, the media leaping onto the bandwagon?

GEN. WESLEY CLARK: Well, in a way. But, you know, history doesn’t repeat itself exactly twice. What I did warn about when I testified in front of Congress in 2002, I said if you want to worry about a state, it shouldn’t be Iraq, it should be Iran. But this government, our administration, wanted to worry about Iraq, not Iran.

I knew why, because I had been through the Pentagon right after 9/11. About ten days after 9/11, I went through the Pentagon and I saw Secretary Rumsfeld and Deputy Secretary Wolfowitz. I went downstairs just to say hello to some of the people on the Joint Staff who used to work for me, and one of the generals called me in. He said, “Sir, you’ve got to come in and talk to me a second.” I said, “Well, you’re too busy.” He said, “No, no.” He says, “We’ve made the decision we’re going to war with Iraq.” This was on or about the 20th of September. I said, “We’re going to war with Iraq? Why?” He said, “I don’t know.” He said, “I guess they don’t know what else to do.” So I said, “Well, did they find some information connecting Saddam to al-Qaeda?” He said, “No, no.” He says, “There’s nothing new that way. They just made the decision to go to war with Iraq.” He said, “I guess it’s like we don’t know what to do about terrorists, but we’ve got a good military and we can take down governments.” And he said, “I guess if the only tool you have is a hammer, every problem has to look like a nail.”

So I came back to see him a few weeks later, and by that time we were bombing in Afghanistan. I said, “Are we still going to war with Iraq?” And he said, “Oh, it’s worse than that.” He reached over on his desk. He picked up a piece of paper. And he said, “I just got this down from upstairs” — meaning the Secretary of Defense’s office — “today.” And he said, “This is a memo that describes how we’re going to take out seven countries in five years, starting with Iraq, and then Syria, Lebanon, Libya, Somalia, Sudan and, finishing off, Iran.” I said, “Is it classified?” He said, “Yes, sir.” I said, “Well, don’t show it to me.” And I saw him a year or so ago, and I said, “You remember that?” He said, “Sir, I didn’t show you that memo! I didn’t show it to you!”

AMY GOODMAN: I’m sorry. What did you say his name was?

GEN. WESLEY CLARK: I’m not going to give you his name.

AMY GOODMAN: So, go through the countries again.

GEN. WESLEY CLARK: Well, starting with Iraq, then Syria and Lebanon, then Libya, then Somalia and Sudan, and back to Iran. So when you look at Iran, you say, “Is it a replay?” It’s not exactly a replay. But here’s the truth: that Iran, from the beginning, has seen that the presence of the United States in Iraq was a threat — a blessing, because we took out Saddam Hussein and the Baathists. They couldn’t handle them. We took care of it for them. But also a threat, because they knew that they were next on the hit list. And so, of course, they got engaged. They lost a million people during the war with Iraq, and they’ve got a long and unprotectable, unsecurable border. So it was in their vital interest to be deeply involved inside Iraq. They tolerated our attacks on the Baathists. They were happy we captured Saddam Hussein.

But they’re building up their own network of influence, and to cement it, they occasionally give some military assistance and training and advice, either directly or indirectly, to both the insurgents and to the militias. And in that sense, it’s not exactly parallel, because there has been, I believe, continuous Iranian engagement, some of it legitimate, some of it illegitimate. I mean, you can hardly fault Iran because they’re offering to do eye operations for Iraqis who need medical attention. That’s not an offense that you can go to war over, perhaps. But it is an effort to gain influence.

And the administration has stubbornly refused to talk with Iran about their perception, in part because they don’t want to pay the price with their domestic — our US domestic political base, the rightwing base, but also because they don’t want to legitimate a government that they’ve been trying to overthrow. If you were Iran, you’d probably believe that you were mostly already at war with the United States anyway, since we’ve asserted that their government needs regime change, and we’ve asked congress to appropriate $75 million to do it, and we are supporting terrorist groups, apparently, who are infiltrating and blowing up things inside Iraq — Iran. And if we’re not doing it, let’s put it this way: we’re probably cognizant of it and encouraging it. So it’s not surprising that we’re moving to a point of confrontation and crisis with Iran.

In joint op-ed, Russia, China slam US idea of holding summit on democracy3hr

‘Iran to return to pre-sanctions crude output until March’4hr

Many US Black Friday shoppers shun stores for online4hr

Republicans struggle to save funding for Trump's border wall5hr

'No war with Iran': Democrats rally as House votes on war powers

No War With Iran