Palestine to file criminal case against UK for Balfour Declaration

Palestine says it is planning to lodge a complaint against Britain for its 1917 Balfour Declaration that paved the way for the occupation of Palestinian lands and the creation of Israeli in the occupied territories.

Foreign Minister Riyad al-Maliki made the announcement in a recent address to the Arab League summit in Mauritania, whose transcript was seen by AFP on Tuesday.

The Balfour Declaration, which was issued in November 1917 by the then British foreign secretary Arthur Balfour, said the UK government "views with favor the establishment in Palestine of a national home for the Jewish people.”

Speaking on behalf of Palestinian President Mahmoud Abbas, Maliki called on the Arab League to assist Palestinians in bringing a criminal case against the UK.

"Almost a century has passed since 1917," he said, adding, "We are working to open up an international criminal case for the crime which they committed against our nation – from the days of the British Mandate all the way to the massacre which was carried out against us from 1948 onwards.”

Under the declaration, "hundreds of thousands of Jews from Europe and elsewhere came to settle in Palestine at the expense of our people, whose ancestors have lived for millennia on the soil of our land," the top Palestinian diplomat pointed out.

That status empowered the Palestinians to achieve membership in UN bodies and treaties. The Palestinians also joined the International Criminal Court in 2015.

The Palestinians are seeking to create an independent state on the territories of the West Bank, including East Jerusalem al-Quds, as well as the Gaza Strip. They are also demanding that Israel withdraw from the Palestinian lands occupied in a 1967 war. 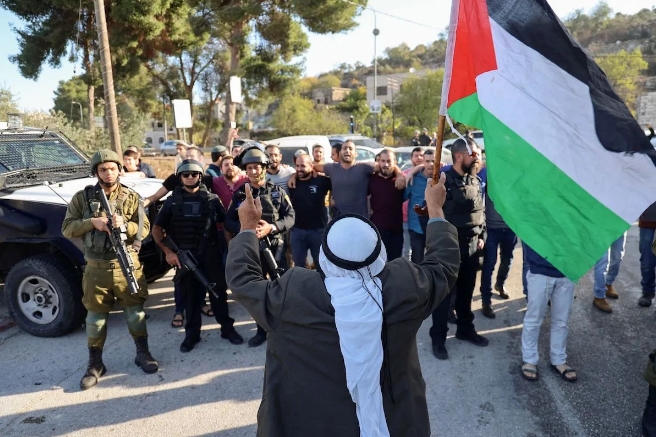 Russia, China slam Israel's 'disproportionate use of force' against Palestinians11sec