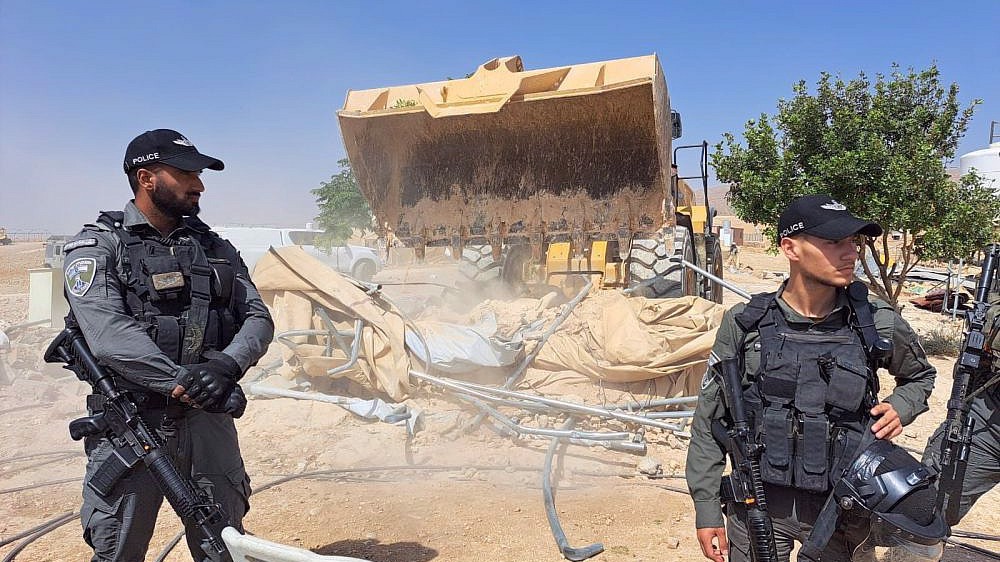 Israeli police stand in front of a bulldozer demolishing homes in Masafer Yatta in front of the occupied West Bank. (WAFA)

The Israeli human rights group B'tselem has written to the International Criminal Court in an attempt to prevent the forced expulsion of over a thousand Palestinians from their homes, in order to create a military firing zone, or training ground for Israeli occupation forces.

According to WAFA news agency, eight villages, four schools, clinics and hundreds of other structures in the area are slated for demolition.

Masafer Yatta is a rural area made up of a collection of 19 Palestinian villages in the southern West Bank, located south and east of the town of Yatta. Israel has been trying to drive these communities out of their homes and lands for decades, but has recently escalated its actions on all levels.

This escalation followed a May 2022 ruling by Israel’s supreme court. The ruling, which contravened international law provisions and basic moral principles, reached the conclusion that the residents have no right to live on the land and there is no legal impediment to expelling them.

However, the forcible transfer of residents in occupied territory is a violation of the Fourth Geneva Convention and the Rome Statute, the treaty that established the ICC.

"Israel has made the residents lives a nightmare: they suffer daily threats by soldiers and settlers to their bodies and property, as well as noise and pollution hazards, routine damage to infrastructure, incessant invasion of their privacy and constant uncertainty over their future," said B’Tselem in a statement.

"Israel is also working to cut these small communities off from their surroundings, with the military placing roadblocks, confiscating cars and hindering activists, journalists and diplomats from accessing the area," the statement added.

The rights group said it had attached to the letter an addendum detailing dozens of incidents in the area since June 2022, which illustrate the violent, day-to-day, reality Israel is imposing on these communities.

In its letter, B’Tselem emphasized that while Israel has since 1999 avoided direct expulsion, it is subjecting the residents to intolerable living conditions in an indirect bid to drive them away.

"This implicit tactic might better obscure Israel’s intention to commit a war crime, but there’s no ambiguity about it: it is the same objective, and it is the same crime."

Dror Sadot, the group's spokesperson, said that B'tselem had chosen to write to the ICC due to its effective intervention in a previous incident, which is the court's 2018 intervention regarding the West Bank community of Khan al-Ahmar, which Israel was planning to raze.

"This is the first time B'tselem has directly asked the ICC for preventative intervention," Sadot said. "After the Israeli Supreme Court ruling it is clear that the Israeli judges are also responsible for those violations and are part of the apartheid mechanism. International intervention is a must."

Masafer Yatta residents and Israeli rights groups say that many of the Palestinian families have been permanently residing in the 3,000 hectares (7,400 acres) area since before Israel occupied the West Bank, in the 1967 Middle East War, and that their eviction would constitute a breach of international law.

The experts urgently called on Israel and the international community to stop the forced evictions, arbitrary displacement and forcible transfer of Palestinian communities from Masafer Yatta.

On 4 May, the court rejected appeals against eviction orders issued to Palestinian inhabitants of the area, which was designated as a closed military training site, “Firing Zone 918”, south of al-Khalil. The decision effectively ends the legal proceedings that lasted for more than two decades, thereby permitting the Israeli forces to clear and use the area for military training.