Ukrainian President Volodymyr Zelensky speaks during his evening video message on Thursday May 26. (Office of President of Ukraine)

Ukrainian president Volodymyr Zelensky has urged his Western allies to stop playing around with Russia and impose tougher sanctions on it to end what he calls a “senseless war” with Moscow.

In his daily address on Thursday, Zelensky said "the catastrophic unfolding of events could be still stopped” if the world powers stop flirting with Russia.

"The catastrophic unfolding events could be still stopped if the world powers did not flirt with Russia but really pressed to end the war,” said the embattled Ukrainian president.

His criticism of the West has increased in recent days as the European Union moves ahead with its Russian oil embargo and as thousands of Russian troops try to encircle the two eastern cities of Sievierodonetsk and Lysychansk.

Zelensky complained about disagreements within the EU on more sanctions against Russia and asked why some countries were being allowed to block the plan.

Hungary is one of the countries that oppose punitive measures against Russian oil imports saying its economy would suffer from the move.

The Ukrainian president said because Russia makes money for some western countries, they prefer to tolerate Moscow.

"Today we hear that allegedly Russia should be given what it wants, supposedly it is necessary to agree that some peoples may be deprived of some of their foreign policy rights," Zelensky said in a video address to the Latvian parliament.

"We must fight for the principle that nation(hood) is important," he said.

According to media reports, Russian troops have attacked from multiple sides in a bid to encircle Ukrainian forces in Severodonetsk, Lysychansk in the eastern part of the country.

Advancing Russian forces came closer to surrounding Ukrainian troops in the eastern part of Ukraine, briefly seizing positions on the last highway out of a crucial pair of Ukrainian-held cities before being beaten back, a Ukrainian official said on Thursday.

If the two cities straddling the Siverskiy Donets river fell, nearly all of the Donbas province of Luhansk would be under Russian control.

"Russia has the advantage, but we are doing everything we can," said Gen. Oleksiy Gromov, deputy chief of the main operations department of Ukraine's general staff.

Moscow is ready to make a "significant contribution" to avert a looming food crisis if the West lifts sanctions imposed on Russia over Ukraine, President Vladimir Putin said in a telephone call with Italy's Prime Minister Mario Draghi on Thursday.

"Vladimir Putin emphasizes that the Russian Federation is ready to make a significant contribution to overcoming the food crisis through the export of grain and fertilizer, subject to the lifting of politically motivated restrictions by the West," the Kremlin said in a statement following the call. 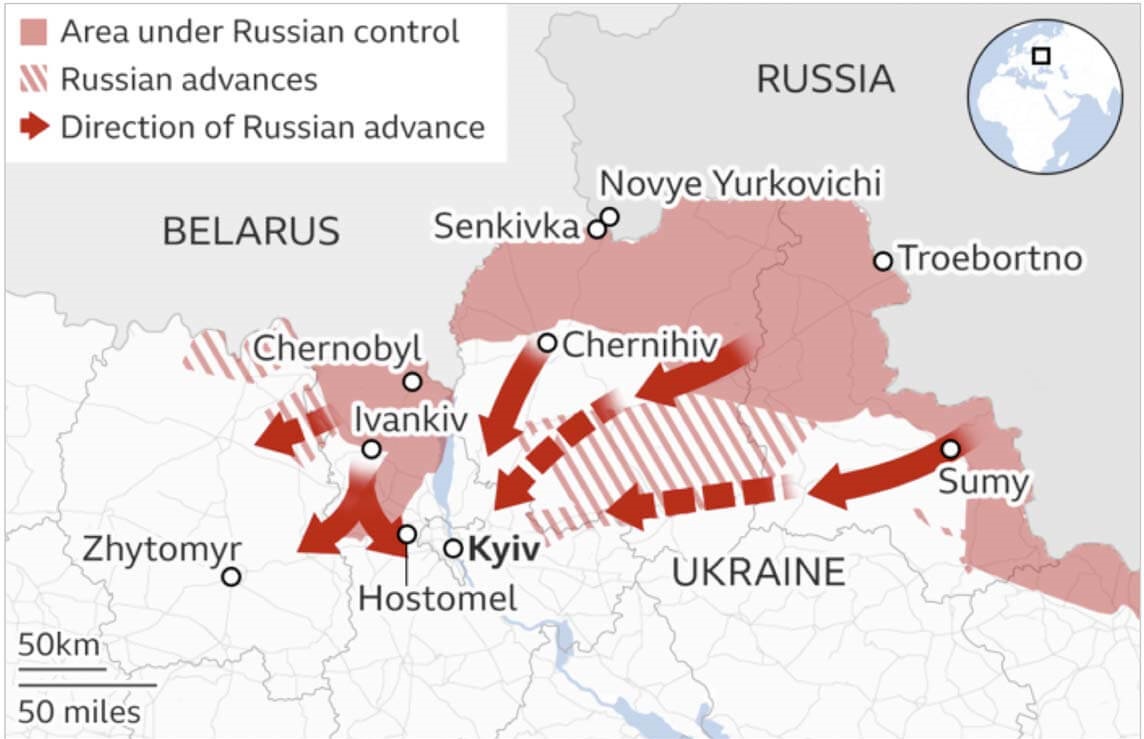 It added that Putin also spoke about "steps taken to ensure the safety of navigation, including the daily opening of humanitarian corridors for the exit of civilian ships from the ports of the Azov and the Black Sea, which is impeded by the Ukrainian side".

Draghi suggested "collaboration between Russia and Ukraine on the unblocking of the Black Sea ports" where the wheat, which is at risk of rotting, is located -- "on the one hand to clear these ports and on the other hand to ensure that there are no clashes during the clearing".

He also said there was "a readiness to continue in this direction" on the Russian side, and that he would call Zelensky "to see if there is a similar readiness".

On Friday, Zelensky said Ukraine is not eager to talk to Russia's Vladimir Putin but that it has to face the reality that this will likely be necessary to end the war.

"There are things to discuss with the Russian leader. I'm not telling you that to me our people are eager to talk to him, but we have to face the realities of what we are living through," Zelensky said.

"What do we want from this meeting... We want our lives back... We want to reclaim the life of a sovereign country within its own territory," he said in an address to an Indonesian think tank.

Russia, the Ukrainian leader said, did not appear to be ready yet for serious peace talks.

The sanctions imposed on Russia over its military operation in Ukraine have disrupted supplies of fertilizer, wheat, and other commodities to other countries.

The two countries together produce 30 percent of the global wheat supply.

Russia said Friday it was expelling five employees from Croatia's embassy in Moscow, following a similar move by Zagreb.

Russia's foreign ministry said it summoned Croatia's ambassador to express its "strong protest over the groundless attempts of the Croatian authorities to blame Russia for war crimes in Ukraine".

The ministry also accused Croatia of providing "military assistance to the neo-Nazi regime in Kiev".

It said that "in response to the unfriendly steps previously taken by Zagreb" five employees of Croatia's embassy in Moscow were declared "persona non grata".

Moscow last week kicked out diplomats from France, Italy and Spain, dozens in total, in retaliation for the expulsion of Russian diplomats from their countries.

"These laboratories exist in Armenia, Kazakhstan, and in the countries of Central Asia," he said in an interview with RT Arabic on Thursday. "We are considering these problems with these countries on a bilateral basis and through the CSTO."

With all the CSTO countries and other CIS countries, he said, Russia has either “concluded or is preparing to conclude” memorandums of cooperation on biological safety, stipulating for mutual disclosures on how biological programs are developing in each of our countries.

"What’s important is transparency that allows us to make sure that these programs do not have a military dimension, as this is prohibited by the Convention [on the Prohibition of Biological and Toxin Weapons]," the minister said.

"These memorandums envisage mutual visits and examinations of the activities of the laboratories."

He further said that it has been put in writing that the biological facilities of each of the sides “must not be attended by military representatives of any third party.”

Israeli forces kill 2 Palestinians in one day in occupied territories1hr

Ukraine slams NATO for ‘doing nothing’ about Russia’s military operation