Idlib residents give back during Ramadan despite price hikes

A date seller at a market in Idlib city, northwestern Syria on the first night of Ramadan. (Photo by AP)

Over half of the region’s four million residents are internally displaced by war and many live in camps for the displaced. But during Ramadan the charity groups help families who suffer from the years of war.

There are women who all take part voluntarily in Hathi Hayati’s Ramadan charity kitchen after filling out an online form.

“I’ve been cooking since I was 10 years old, so it’s already a hobby and passion of mine,” volunteer cook Om Ali tells Al Jazeera while filling up bottles of fragrant soos.

“But I also want to help people, especially those in the camps,” says the 54-year-old mother of two, who was herself forced to flee war-torn Aleppo city.

As Om Ali boils 80kg of rice for tonight’s meal in the displacement camp, volunteer Om Asaad is at her side chopping vegetables.

“I worked in cooking and catering for much of my life, so I know how to run a kitchen,” Om Asaad says.

“There are many of our sisters in the camps whose husbands and family members are detained, missing, or even killed. I’m happy to be helping them.” 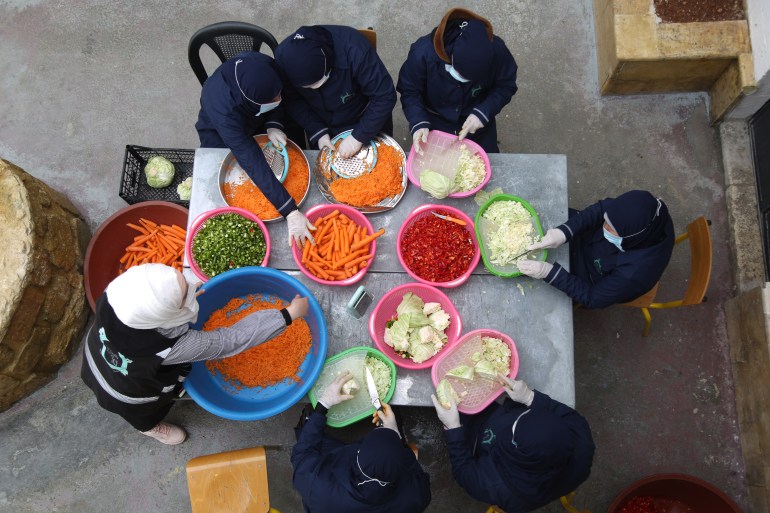 The prices of many types of vegetables, fruits, meat and basic food items have risen along with fuel.

According to Basma Alloush, non-resident fellow at The Tahrir Institute for Middle East Policy, “recent global crises have worsened living conditions in Idlib”.

“There is an impact on northwestern Syria as a result of the Ukrainian crisis, but also the economic turmoil in Turkey where the currency lost half its value,” Alloush explains. Syria’s northwest is highly dependent on Turkish imports, she says.

An estimated 97 percent of the population in Idlib now live in extreme poverty, according to the United Nations.

To make matters worse, Russia’s special military operation in Ukraine has caused a global wheat crisis, and Idlib province is not immune to its impact.

“All of the flour the bakeries in the northwest import comes from Turkey. But Turkey relies heavily on Russia and Ukrainian wheat,” the Tahrir Institute’s Alloush says.

“These crises have caused rippling effects in northwestern Syria.”

Hamdo al-Jassem, director of public relations at the Ministry of Economy in the Salvation Government, told al-Monitor, “Idlib markets depend on importing vegetables and fruits from Turkey, and the increasing demand had led to price increases ahead of Ramadan. Supplies are low since most fruits and vegetables are out of season.”

Jassem continued, “The government is also carrying out an emergency intervention by monitoring prices and market inflation on a daily basis and preventing monopolies. During the first quarter of 2022, the government issued 1,190 fines for market violations.”

Flights to resume at Damascus airport after Israeli airstrikes

US sends military convoy to northern Iraq escorted by drones

Iranian citizen in Sweden jail objects to his detention conditions4hr

Afghan national freed from US military prison after 15 years6hr

‘US seeking to pressure Syria by manipulating OPCW reports’

‘US presence in Syria neither mandated by UN, nor at Damascus request’