Zarif: US pouring weapons all over globe while seeking arms embargo against Iran

Iranian Foreign Minister Mohammad Javad Zarif has responded to his American counterpart's attempts to push ahead with a scheme to extend a United Nations arms embargo on Iran, saying the “United States of Arms” is pouring weapons all over the globe as it is the world’s top war initiator.

In a post on his official Twitter account on Saturday, Zarif described the US as the world's top military spender, arms seller, war initiator & instigator and conflict profiteer.

He said while the United States has long been the number one military spender and arms seller in the world, its Secretary of State Mike Pompeo is "apparently worried about Iran."

The U.S. has long been the world's top

Yet @SecPompeo is apparently so worried about Iran—a huge U.S. arms customer till 1979—that he's pouring weapons all over the globe.#UnitedStatesOfArms pic.twitter.com/29dwpdIQmQ

"Yet @SecPompeo is apparently so worried about Iran—a huge U.S. arms customer till 1979—that he's pouring weapons all over the globe," he added.

A report by The New York Times on April 26 said Pompeo plans to invoke a provision in a UN-endorsed international nuclear agreement, which Washington left in 2018, in an attempt to either extend beyond October the UN arms embargo in place against Iran since 2006/2007 or get the world body to slap even harsher sanctions on the Islamic Republic.

The removal of Iran's arms embargo is based on the nuclear deal -- officially known as the Joint Comprehensive Plan of Action (JCPOA) -- signed between Tehran and major world powers in 2015.

In defiance of global criticism, the US unilaterally withdrew from the JCPOA, which President Donald Trump called “the worst deal ever,” in May 2018 and re-imposed the anti-Iran sanctions.

Iran's Ambassador to the United Nations Majid Takht Ravanchi said on Wednesday that the claim that the United States is still a party to the agreement which allows it to invoke a sanctions snapback under certain pretexts is nothing but “an unprecedented joke.”

Any measure to extend Iran’s arms embargo in breach of Resolution 2231: UN envoy
Washington is reportedly planning to use a threat to trigger a return of all UN sanctions against Iran.

“Security Council members should pay heed to the fact that any move to counter the lifting of Iran's arms embargo violates UNSC Resolution 2231,” the Iranian diplomat told the Islamic Republic News Agency (IRNA).

Diplomatic sources at the United Nations said Washington has a tough challenge ahead at the Security Council if it pushes for an extension of the world body’s arms embargo against Iran.

A US official, who was speaking on condition of anonymity, said Washington has shared its strategy with Britain, France and Germany, who are permanent Security Council member states and parties to the Iran deal.

US to face tough battle in pushing plan to extend UN Iran arms embargo: Diplomats
UN diplomats say the US will have a tough challenge ahead if it pushes for an extension of the world body’s arms embargo on Iran by resorting to a process outlined in a nuclear deal it left in 2018.

The diplomats said the scheme has not been shared with the remaining 11 council members, including veto-wielders Russia and China, the two other signatories to the JCPOA that are deemed certain to oppose the arms embargo on Iran.

The European Union foreign policy chief also said Thursday that the US is no longer a party to the JCPOA, pointing to the limitations that Washington is facing in its avowed bid to extend the arms embargo under the deal against Tehran.

US no longer party to JCPOA: EU on Washington’s anti-Iran bid
The EU foreign policy chief says the US is no longer a JCPOA party, as Washington attempts to extend an arms embargo against Iran under the deal.

"It's clear that in the statement by President Trump and the US presidential memorandum of last May, they announced that he was ending his participation in JCPOA," Josep Borrell told the Radio Free Europe/Radio Liberty media outlet.

"And I also want to recall that the US has not participated in any meetings of activities within the framework of this [nuclear] agreement since then. So it's quite clear for us that the US are no longer a participating member in this agreement,” he added.

In a phone conversation on Tuesday, the Iranian foreign minister and his Russian counterpart, Sergei Lavrov, also dismissed Pompeo’s most recent anti-Iran scheme as “delusional” and “impractical.” 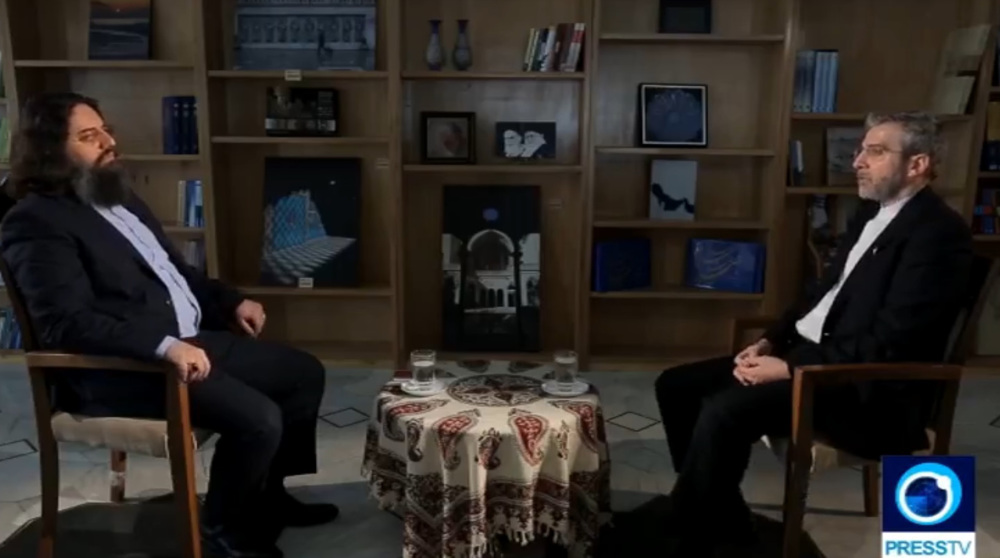